Home » Weather in Bergen – When to Go, Best Time to Visit

Bergen is located on Norway’s mild west coast. It has a temperate oceanic climate, with unstable and wet weather.

Despite its northern latitude (60ºN), Bergen’s weather is less harsh than one would expect, thanks to the Gulf Stream which brings warmth to Norway.

Bergen has much to offer visitors any time of year. To help you better prepare and maximize your experience, learn what kind of weather to expect in all four seasons.

Temperatures in winter remain just above freezing point. Average lows hover between -1 and 1ºC (30 and 34ºF), while highs rarely exceed 6ºC (43ºF). January is the coldest month, with an average temperature of 2ºC (36ºF).

Bergen is statistically one of the wettest cities in Norway, and in Europe for that matter. This is mainly because of the mountains around Bergen that, by blocking air masses from the Atlantic Ocean, give rise to plentiful rainfall, especially during the autumn months. 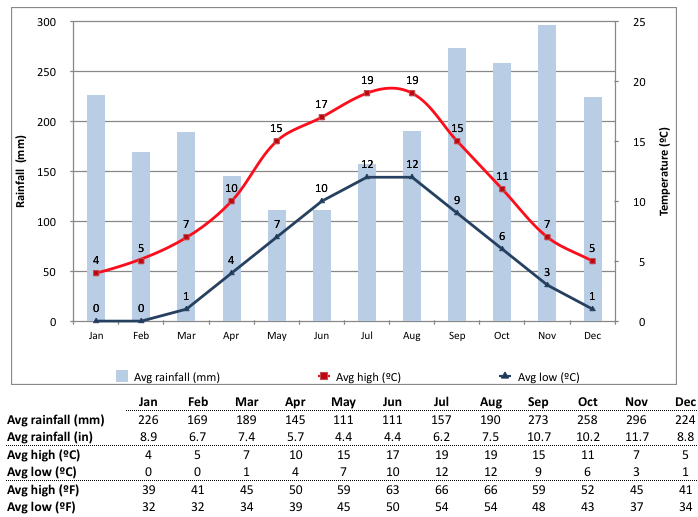 The best time to visit Bergen is from May through September. Generally, you can expect some days of blue skies, warm weather, and many hours of sunlight.

Whatever the season, it may be wise to pack a waterproof jacket, or to carry an umbrella. If your travel plans include hiking and spending time outdoors, also pack proper footwear (boots and warm socks in winter).

Because Bergen’s weather is unpredictable, it may be useful to check a Norwegian weather forecast website right before you go.