Home » 10 of the Best Places to Visit in Portugal

Bordered by the Atlantic Ocean on the west and south coasts and by Spain on the north and east, the Portuguese mainland forms a small rectangle-shaped territory in the Iberian Peninsula. Portugal also includes the Azores and Madeira islands located on the Atlantic Ocean.

The country has thrived on its connection to the sea, an important natural and economic resource. This connection was also fundamental to the Portuguese Discoveries in the sixteenth century.

From north to south, a trip along the coast can take you to the cities of Porto, Coimbra and Lisbon, and onwards to the natural landscapes and beaches of the southwest Alentejo and the Algarve.

To the northeast, the Douro valley offers a dramatic hillside of vineyards. The inner Alentejo, north of the Algarve, is home to medieval villages with their small white-washed houses. The capital Évora has a UNESCO World Heritage status. Finally, the beautiful Azores and Madeira islands are a two-hour flight away.

Here is a list of ten of the best destinations and unmissable sights in Portugal, and a map to locate them. 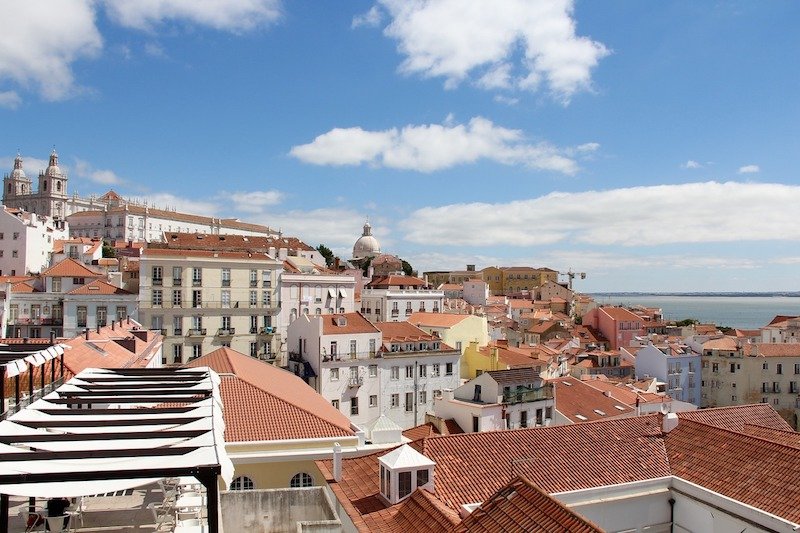 Strategically located on the Tejo estuary, Lisbon’s long history dates back to the Romans. The city developed under the so-called Moors, being part of the Islamic world before Afonso Henriques was proclaimed the first king of Portugal in 1147. The Tejo, the longest river in the Iberian Peninsula, shared with Spain, played a crucial role in the Portuguese Discoveries of the sixteenth century.

Today, Lisbon is a modern European city that continues to embrace its history from the Moorish São Jorge Castle and the Alfama neighbourhood, birthplace of fado, to the Belém landmarks reminiscent of the Discoveries. Lisbon’s seven hills strike visitors with unexpected stunning vistas of the city and river.

If you feel like venturing outside the city, the UNESCO World Heritage Sintra with its enchanting palaces, and the beach and seaside town of Cascais, are two of the best day trips from Lisbon.

Lisbon Guru, written by locals, is a useful website to check before your trip to Lisbon, as it provides tips for using public transport, guides for must-see sights, as well as hotel and restaurant recommendations. 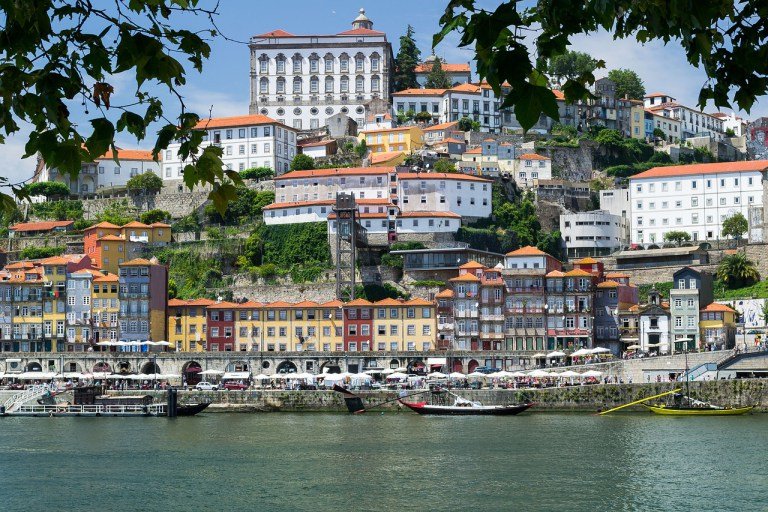 Porto is Portugal’s second city that some would argue more authentic than the capital. Porto is smaller than Lisbon, but has a UNESCO-listed historic centre. Some of the highlights include the quaint Cais da Ribeira riverfront, the impressive Dom Luís bridge, and the beautiful São Bento train station. And of course, the port wine lodges are a must-visit for a tasting experience. 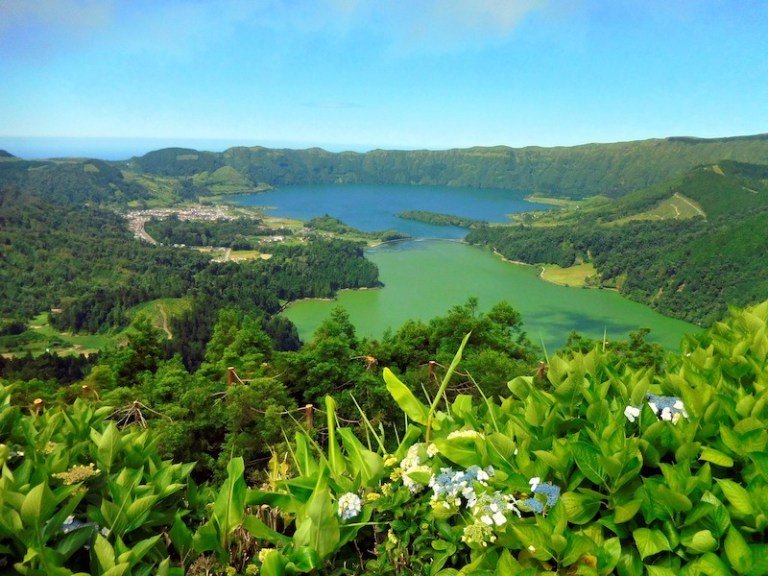 Formed by nine small volcanic islands of natural and man-made landscapes, the Azores has been honoured by multiple tourism awards. Fumaroles, caverns, crater lakes, and flowers are everywhere to enjoy.

The beautiful Lagoa das Sete Cidades is the top sight on São Miguel island. Equally impressive is the dormant volcano Algar do Carvão on Terceira. On Faial, don’t miss the Capelinhos volcanic complex, and challenge yourself by climbing Pico Mountain, Portugal’s highest mountain at 2,351 metres (7,713 feet).

Learn More
The Top 10 Tourist Attractions in the Azores 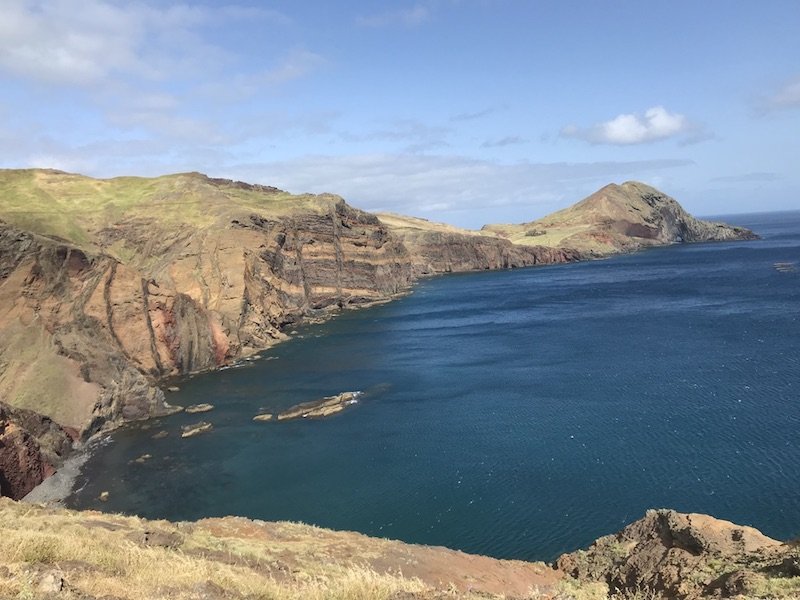 Madeira is a Portuguese archipelago in the North Atlantic, just off the west coast of Africa. With a great weather, this subtropical destination offers year-round activities like hiking in a stunning scenery. Both experienced hikers and casual walkers will find a suitable levada, a water channel running from the mountains to populations. Along the way, admire the many viewpoints offering stunning vistas of the island and ocean.

Learn More
The Perfect Itinerary for a Trip to Madeira 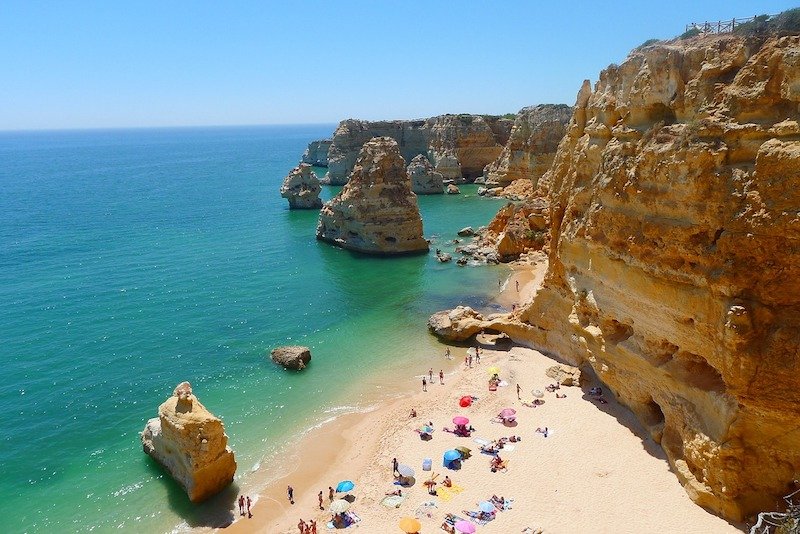 Praia da Rocha, one of the most popular beaches in the Algarve

When it comes to the weather, the Algarve is your best bet, being the sunniest and warmest of the Portuguese regions. This southern coastal strip is known for its amazing white sand beaches. Usually, warm waters can be expected on beaches closer to the Spanish border. The most popular beaches are those around the towns of Albufeira, Vilamoura and Quarteira. Enjoyable albeit refreshing waters are generally the rule on the Algarve’s western beaches closer to Sagre’s dramatic sea-carved cliffs overlooking the Atlantic Ocean. 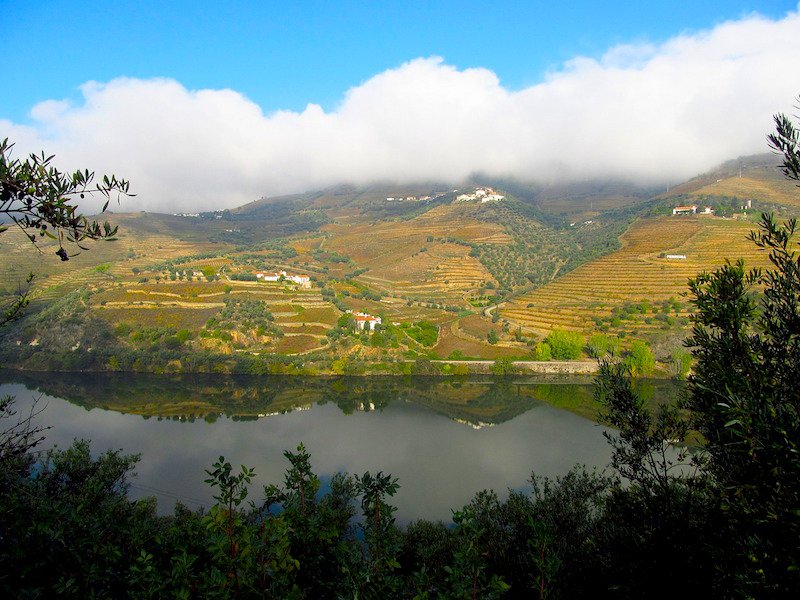 The Douro Valley is the most famous wine region in Portugal. Port wine and other Portuguese wines are produced on the dramatic Douro River’s hillside listed as a UNESCO World Heritage Site. From Porto, there are many ways to explore the Douro Valley depending of your personal taste and budget. You can go on a Douro Valley Road Trip, take a historic train ride or a relaxing boat trip. 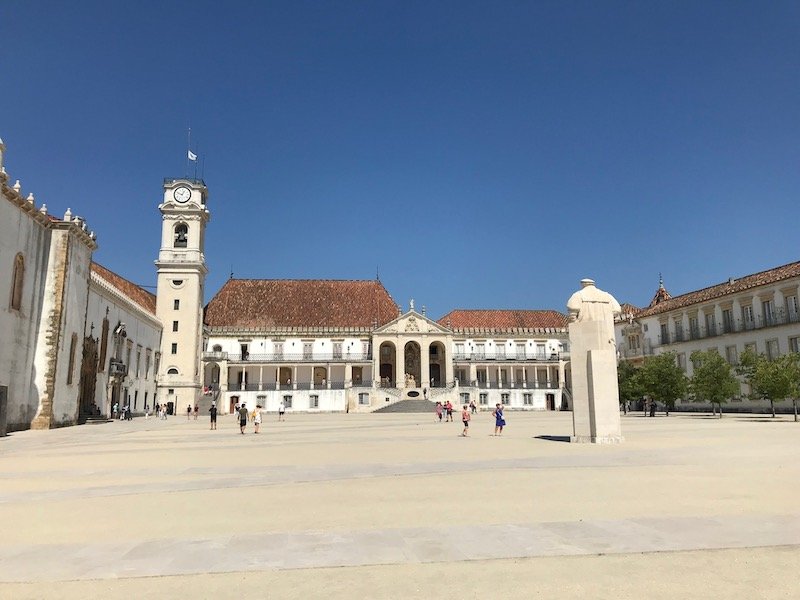 Halfway between Lisbon and Porto, Coimbra is the city of fado and of one of the world’s oldest universities. University of Coimbra is a UNESCO World Heritage Site, and Joanina Library, dating from the 18th century, is one of its highlights. The ancient bookshelves and fabulous ceiling paintings will impress and delight anyone interested in great European institutions.

Coimbra has a well-preserved historic centre, with several cafés, restaurants and shops. On the opposite side of the Mondego River, the ruins of the Gothic Monastery of Santa Clara-a-Velha commissioned by Portugal’s saintly queen, Inês de Castro, are also worth a visit. Not far, Quinta das Lágrimas is a palace turned hotel, evocative of a tragic love. King Afonso IV planned and ordered the death of Inês de Castro, putting an end to the forbidden love of his son Pedro. Legend has it that the tears shed over Inês de Castro’s death would have filled the Fountain of Tears (Fonte das Lágrimas). 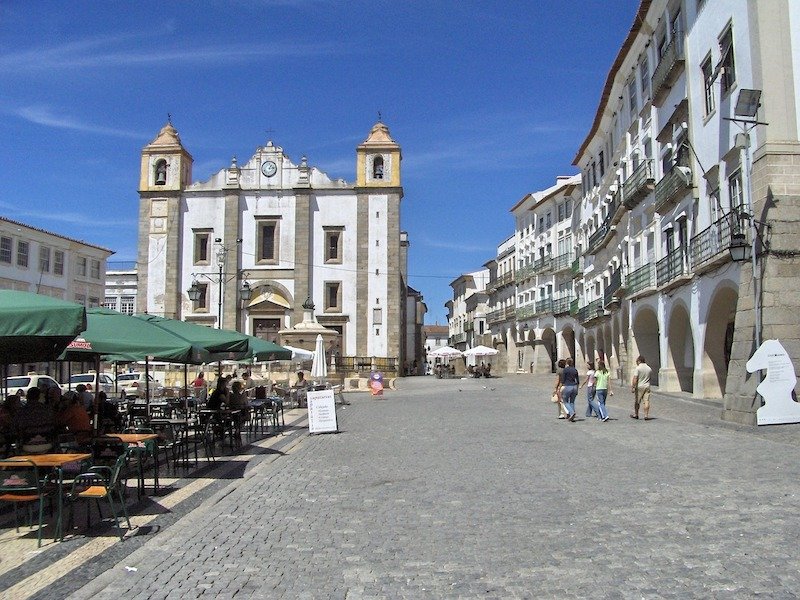 Located in the Alentejo, a wine region mid-way between Lisbon and the Spanish Extremadura, Évora’s historic centre is a UNESCO World Heritage Site. Its roots go back to Roman times, and the town retains the ruins of a Roman temple known as Temple of Diana, although some archaeologists believe it was an imperial cult temple dedicated to Julius Caesar.

Évora is a small town, so you won’t have trouble finding its main square Praça do Giraldo, surrounded by arcades, cafés and shops. From here, explore the streets of white-washed houses, decorated with azulejos (Portuguese hand-painted tiles), many of which survived the great earthquake of 1755 that destroyed many towns in Portugal, including the capital. Don’t miss the chance to do a wine tasting and taste local dishes. 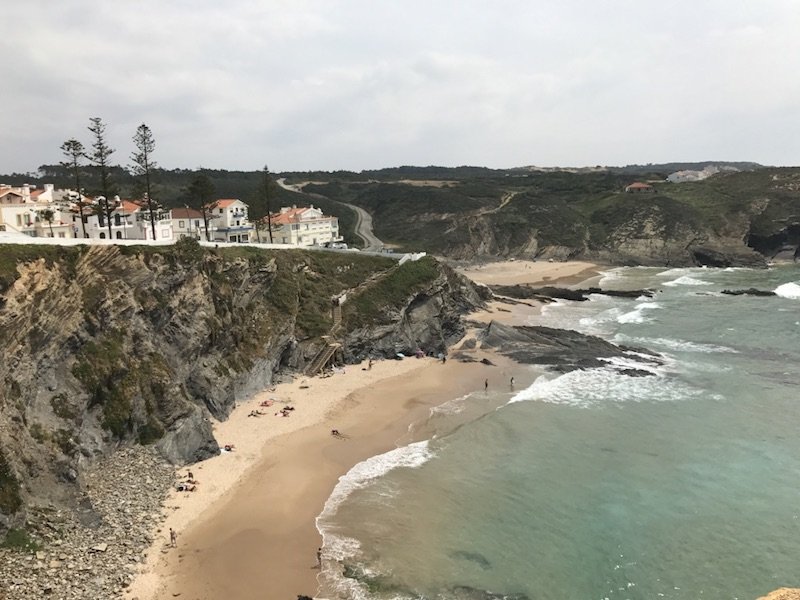 Costa Vicentina Natural Park in the southwest Alentejo stretches for approximately 110 kilometres (68 miles) of a stunning coastline from São Torpes in the Alentejo to Burgau in the Algarve.

Rather than go to crowded Algarve, some Portuguese holidaymakers descend the Alentejo coast to enjoy its beaches and nature. A scenery of marshes and lagoons in Tróia gives way to cliffs and reefs in Porto Covo, Pessegueiro island, Carrapateira, and the two promontories, Cabo Sardão and Cabo de São Vicente. On the way, the picturesque towns of Porto Côvo, Vila Nova de Mil Fontes, Zambujeira do Mar and Aljezur offer accommodation in the area. 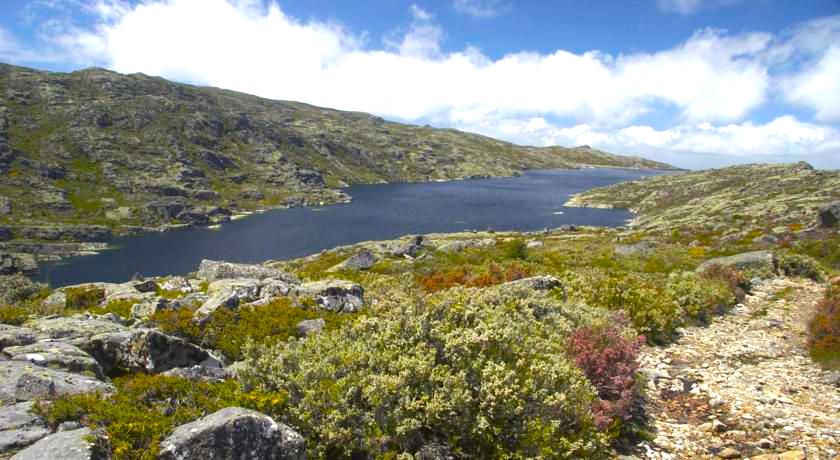 Serra da Estrela is the highest mountain in mainland Portugal at 1,1993 metres (6,539 feet). Located in the middle of the country, it offers snow and a ski resort in winter, and nature hikes in summer. Highlights include the Zêzere valley, the lake known as Lagoa Comprida, the glacial valleys of Covão do Urso and Covão d’Ametade. Also here is one of Portugal’s most beautiful routes that goes through 12 preserved historic villages of granite and schist.