Home » Brazil Weather – When to Go, Best Time to Visit

The climate of Brazil is tropical in the main tourist cities, but varies considerably from region to region. Temperatures and rainfall depend upon two main factors: altitude, and proximity to the sea.

With that in mind, Brazil has five different climatic regions: equatorial, semi-arid, tropical, highland tropical, and subtropical. The seasons are at opposite times to those in the northern hemisphere. Winter runs from June through September, while summer runs between December and March.

In the Amazon region, near the equator, including the cities of Manaus and Belém, average temperatures are high throughout the year, between 24 – 26ºC (75 – 79ºF), with little seasonal variation. At times, however, it can get cooler under the influence of the Atlantic polar mass.

At the country’s other extreme, the south regions of Rio Grande do Sul and Santa Catarina have a subtropical climate, with relatively well defined seasons. Summers are hot and winters are cold by Brazilian standards, and it can snow in mountainous areas. The average annual temperatures in the cities of Porto Alegre and Curitiba range from 15 – 25ºC (59 – 77ºF).

In central Brazil, the seasons are also relatively well defined. The average annual temperatures in the cities of Belo Horizonte, Brasília and São Paulo vary between 15 – 24ºC (59 – 75ºF).

Coastal cities between Fortaleza and Rio de Janeiro, including Recife, Maceió and Salvador, have tropical climates, with average temperatures between 23 – 27ºC (73 – 81ºF), reaching their highest in December through February.

Brazil receives moderate rain but it also varies depending on the region. It rains mostly in the summer months (December to March), with some exceptions.

The Amazon region is the wettest in Brazil, especially around the city of Belém. There is no dry season but a less rainy period that lasts between 3 to 5 months (June to October). North of the Amazon (above the equator), the dry season takes place during the Brazilian winter (June to September).

The semi-arid Northeast region is the driest. On the other hand, the south and the Atlantic coast up to Salvador da Bahia receive moderate rain distributed throughout the year, with a dry season during the winter months. 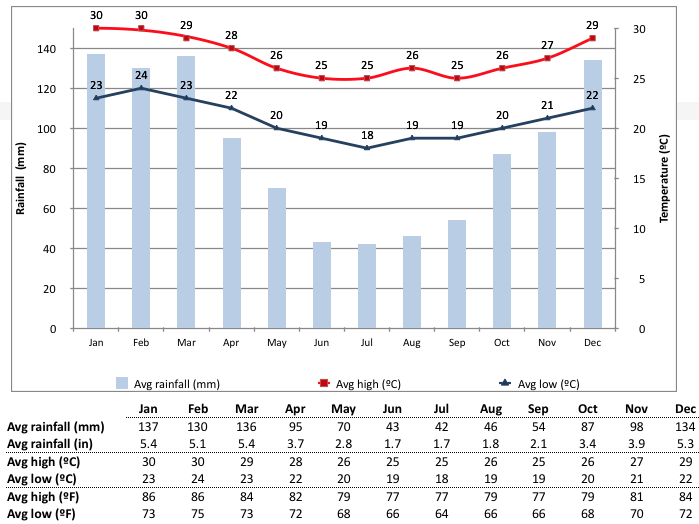 Brazil is a year-round destination, as temperatures are generally pleasant. However, there are regional and seasonal temperature and rainfall variations.

To visit the Amazon, the dry season is best, in particular the months of June through August. The ideal time to explore the Pantanal’s wildlife is between July and October.

Coastal cities, such as Fortaleza, Maceió, Recife, Rio de Janeiro and Salvador, have high temperatures throughout the year, being milder between May and November, when there’s also less rain.

Southern Brazil, between Minas Gerais and Rio Grande, including the cities of Belo Horizonte, São Paulo and Porto Alegre, is the only region with low temperatures during the winter months (June to September).