Home » Weather in Cape Verde – When to Go, Best Time to Visit

The climate of Cape Verde is tropical dry, with year-round warm temperatures and very little rainfall.

The northeast trade winds usually blow in the archipelago’s ten islands throughout the year.

But from December to March, a seasonal strong and dry wind, known as the Harmattan, carries dust and sand to Cape Verde from the Sahara Desert. The Harmattan also makes the windsurfing and kitesurfing conditions just right for those looking to challenge themselves.

Despite the latitude, Cape Verde’s temperatures are generally not too high, being consistent throughout the year. This is essentially due to the trade winds and a cool sea current. Cape Verde also benefits from an almost consistent daily average temperature, with night and day differences usually below 6ºC (43ºF).

Cape Verde receives very little rainfall during most of the year (9 to 10 months). It experiences a rainy season starting in August and extending to the early autumn months.

However, the rainfall can be unpredictable: some years receive almost no rain, while other years witness the annual rainfall concentrated in a single day, which results in landslides and flooding. 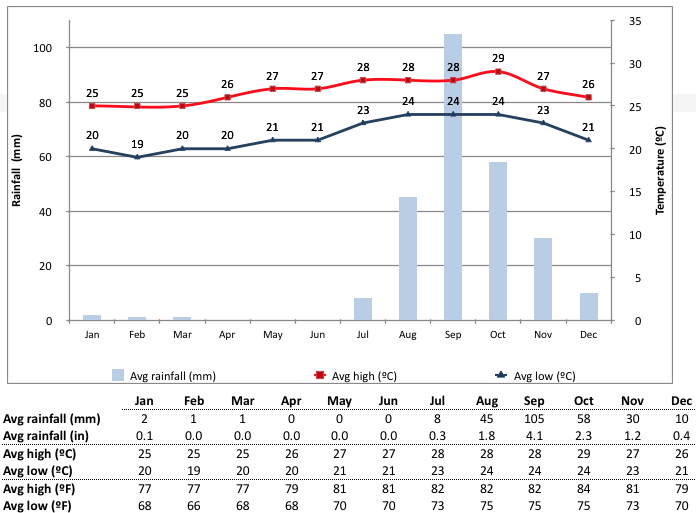 The sea temperature is above 20ºC (68ºF) throughout the year, rising to 25ºC (77ºF) in late summer and early autumn (September and October).

Cape Verde is a destination to be enjoyed across the whole year. Moderate and consistent air and sea temperatures, and low humidity, invite holidaying at any time of the year, winter or summer.

However, prices for package holidays are usually at their highest during the peak season, from June through August. Booking off-season travel to Cape Verde can save you money.