Cuenca is a small Spanish town, in the Castilla-La Mancha region, with a surprising historic centre. It can be a great day trip from Madrid, as well as an interesting stop on the high-speed train line to Valencia.

The historic walled town of Cuenca is a UNESCO World Heritage site boasting a well-preserved medieval fortress that blends harmoniously into the natural landscape.

The peculiar Casas Colgadas, or Hanging Houses, are one of Cuenca’s most famous sights, with their big balconies perched on the edge of steep cliffs overlooking Huécar River. Only three hanging houses remain today though. 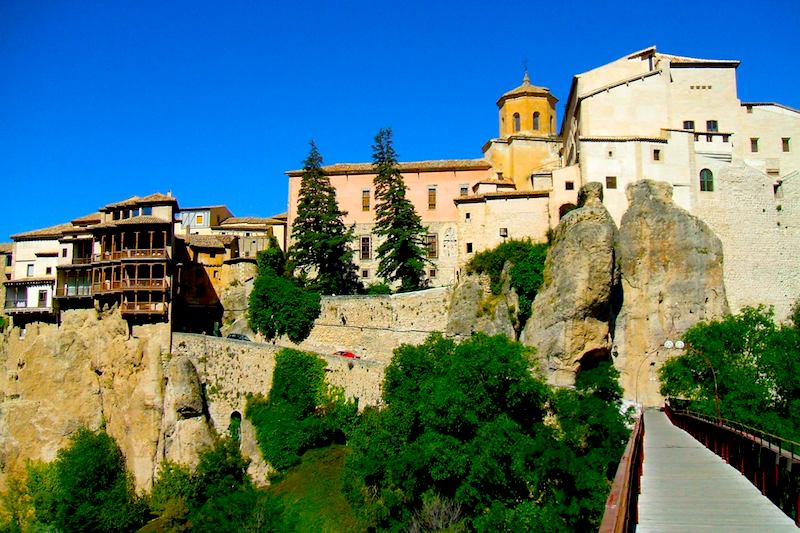 What to Do and See in Cuenca

To sample the local cuisine, El Secreto (Calle de Alfonso VIII 81) offers views of the Casas Colgadas from the back of the restaurant. Taberna Albero (Calle Clavel 1) is another popular restaurant in Cuenca.

Where to Stay in Cuenca 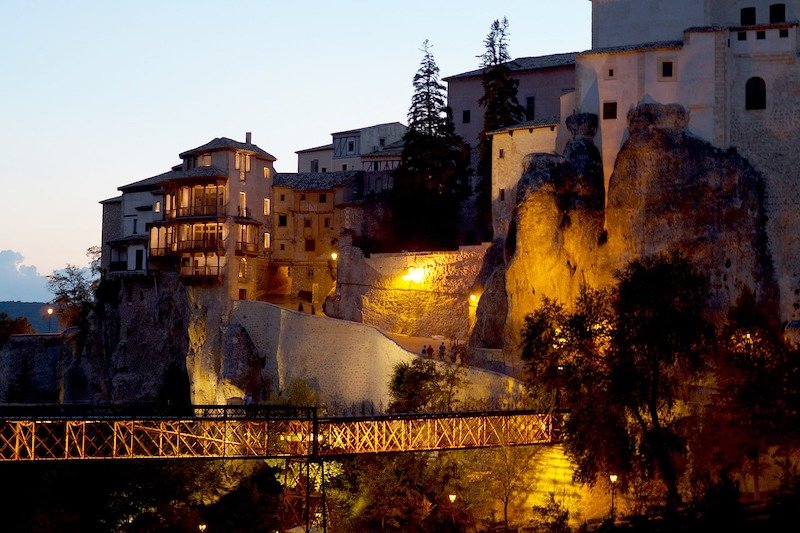 If you decide to spend the night in Cuenca, there are a few nice accommodation options.
Parador de Cuenca set on a former convent offers one of the best experiences. Besides the historic building, you can take in the views to Casas Colgadas. NH Cuidad de Cuenca and Exe Cuenca are other available accommodations.

Just like in Madrid, it can get quite hot during the summer months in Cuenca. While temperatures above 30ºC (86ºF) are common in July and August, spring and autumn can be pleasantly warm with plenty of sunshine and average temperatures around 17ºC (64ºF). Winters see low temperatures, with daytime averages of 10ºC (50ºF), and increased precipitation.

How to Get to Cuenca

Cuenca is located midway between Madrid and Valencia. While driving a rental car is an option, there are other good transport connections.

From Madrid, take the high-speed AVE train in Atocha station with departures throughout the day. The trip takes about 55 minutes, and the ticket can be as low as €16 one way if bought some time in advance. However, it will usually be a bit more expensive as most people end up buying on the day of travel or very close to it.

Note that Cuenca’s Fernando Zobel railway station is about 5 kilometres outside the historic centre. There’s a bus (Línea 1) that you can take for €2.15 to reach the city centre. A cab ride costs around €10.

Another option to get from Madrid do Cuenca is by bus operated by Avanza. The trip takes around 2 hours, and fares start at €13. The bus departs from Estación Sur, also known as Méndez Álvaro bus station after the Madrid neighbourhood. In Cuenca, the bus station is located close to the historic centre.