Located on the banks of the Rhine River in western Germany, Düsseldorf is not as popular as say Berlin, Munich or Cologne. But if you’re exploring the country, you might consider checking out what’s so special about Düsseldorf.

Düsseldorf has a historic centre with over 700 years, but it’s also a modern, lively city that is on the cutting edge of architecture, fashion, art and advertising in Germany and Europe. It has several new developments and exciting areas. We give you some hints on what you can expect. 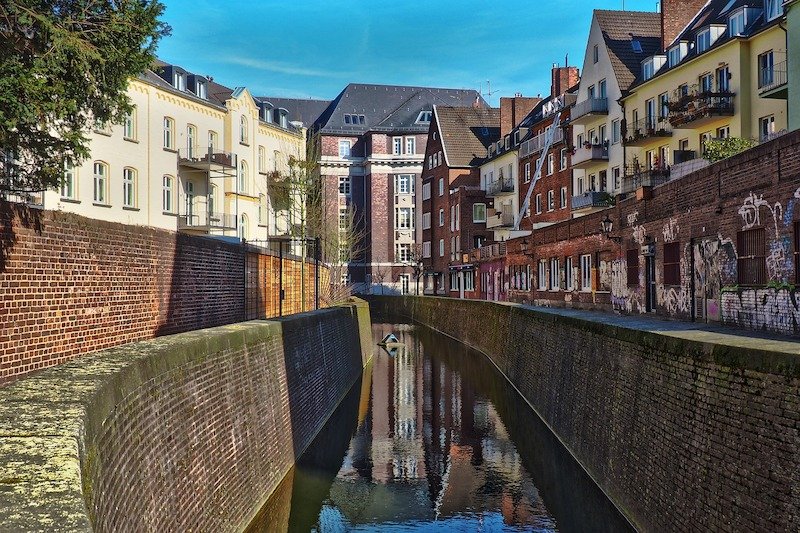 Altstadt (Old Town) is the heart of Düsseldorf, and one of the busiest areas of the capital of North Rhine-Westphalia. With 260 bars, breweries, and restaurants crammed into one kilometre, it’s easy to see why they call it “the longest bar in the world”.

But the Old Town is also home to the contemporary art centres K20 and K21, the City History Museum, and the Deutsche Oper am Rhein, the opera company that performs in Opernhaus Düsseldorf.

Built in 1206, St Lambertus Church is probably one of the oldest buildings in the city. You’ll find this beautiful church on Stiftplatz, but you’ll glimpse its twisted tower when walking along the Rhine River promenade. St. Andreas Church built in the Baroque style is another landmark in the area.

Linking Altstadt to the modern MedienHafen, the beautiful Rhine promenade is especially enjoyed in the summer when the foot and bike paths are filled with locals strolling. There are also rows of restaurants, cafes, and bars to chill out while you watch the boats cruise the Rhine. 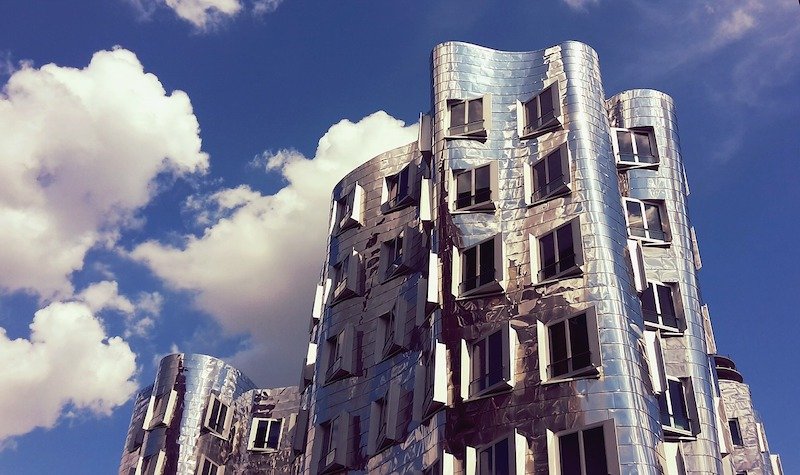 The old harbour became known as the MedienHafen (Media Harbour) after the city decided to renovate its warehouses. The area retains a harbour ambiance, but is now filled with contemporary architecture. The most notable of these buildings is the complex of Rheinhafen centre of arts and the media by Frank Gehry which has become a new landmark in the city of Düsseldorf.

For shopping, head to Königsallee, or simply Kö as the locals affectionately call Düsseldorf’s most exclusive street with its luxury brands. West of Kö, you’ll find some of the best luxury hotels in the city: Breidenbacher Hof, InterContinental and Steigenberger Parkhotel.

The best way to discover the Düsseldorf’s sights is on foot. Another great way is using the city’s bike rental services. Check out nextbike or Call a Bike to learn more about this transport option.

Düsseldorf’s public transport service is also very efficient. A single ticket (Preisstufe A) costs €2.80 and can be used on buses and suburban trains for 90 minutes. There is a cheaper ticket that costs €1.70 (Kurzstrecke), valid for short journeys only (4 stops or 30 minutes).

If you visit Düsseldorf during the spring and summer months, a cruise on the Rhine offers a different perspective of the city and its buildings. On this one-hour boat trip you will have the chance to go under Theodor Heuss bridge, the first German suspension bridge, completed in 1957. Two of the main cruise companies in Düsseldorf are Weisse Flotte and KD .

People come in winter to visit Düsseldorf’s beautiful Christmas Markets and for the lively Karneval, a huge carnival celebration that rivals only with that of Cologne.

The Rheinkirmes, held each year during the third week of July, is a popular event, and one of the best summer attractions of North Rhine-Westphalia. Originally a religious festival for the patron saint Apollinaris, it now offers a fair with fun rides, good food, and great German beers.

If you’re arriving by plane, find out how to get from Düsseldorf / Weeze Airport to the city centre.

The central station – Düsseldorf Hbf is one of the main hubs for Deutsche Bahn (German state railway). Located about 2 kilometres from Altstadt (Old Town), you can walk there, but if you’re carrying luggage you might want to take the U-Bahn (several lines).

The best time to visit Düsseldorf is during the spring and summer months (mid-May to mid-September), thanks to mild temperatures and long days. Early autumn can have its charms with the fall foliage, but it may feel a bit cold and rainy.