Established in 1969 as national park, Doñana is one of Spain’s untouched wildernesses, known for its rich bird life and biodiversity.

Doñana was listed as a UNESCO biosphere reserve in 1980, and later in 1994 as a World Heritage Site.

The park is located in the southwest of the Iberian Peninsula, in Andalusia, between the provinces of Cádiz and Huelva, on the right bank of the Guadalquivir River at its estuary on the Atlantic Ocean. It covers about 542 square kilometres (209 square miles).

If you’re contemplating a visit, here’s information to help you get started with your travel plans. 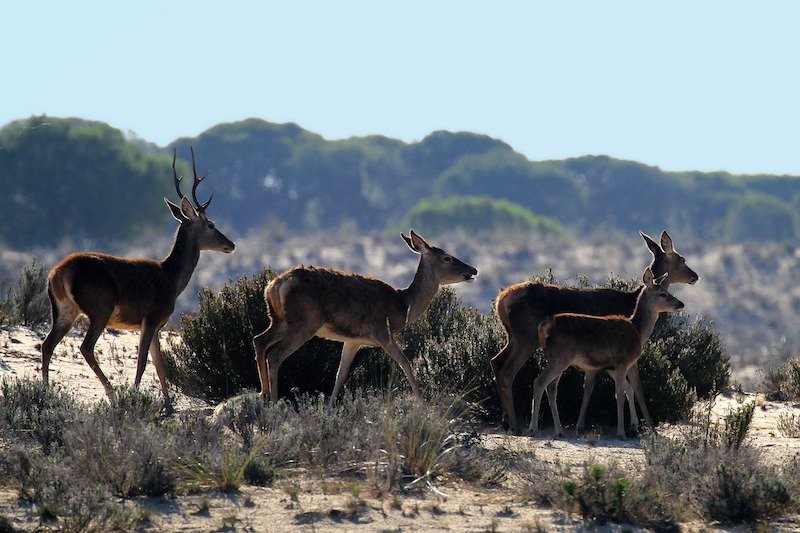 Red deer with pine trees on the back

About half of the park, stretching from Huelva to Sanlúcar de Barrameda, is dominated by marshlands, and the other half consists of sand dunes, with Mediterranean forest and scrub woodland on the transition. Each ecosystem is different, home to many birds and colonies that travel between Europe and Africa.

In a visit to Doñana, you can enjoy the different types of landscape – dunes, beaches, pine woods, woodlands and marismas (wetlands) – and spot the wildlife, including wild boars, red deer, rabbits, and numerous waterfowl and migratory birds. And if you’re lucky, you’ll spot the royal eagle and the Iberian lynx (two endangered species) in their natural habitat. 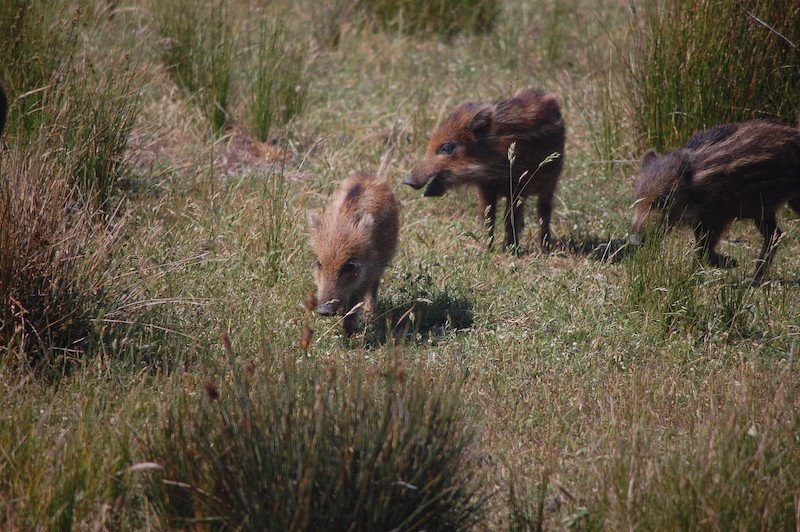 Besides exploring the park, you can also enjoy the beautiful beaches of Mazagón, Matalascañas and Castilla along an undeveloped coastline of warm waters.

While the beach resort towns are somehow unattractive, some other “pueblos” are worth a quick visit. The town of Almonte is known for its white little houses. El Rocío, with its purposely-left-unpaved roads, is famous for its Pilgrimage during the weekend of Pentecost. 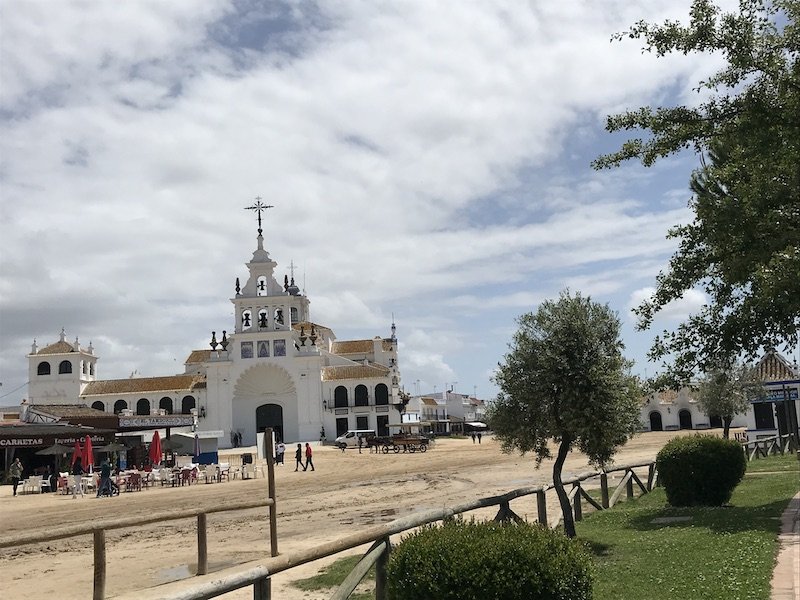 El Rocío with its hermitage

Palos de la Frontera has the Wharf of the Caravels, a museum with replicas of the boats used by Christopher Columbus on his first voyage to America, as well as La Rabida Monastery founded in 1261, where the explorer prepared for his voyage.

You can visit the park on your own, exploring the various senderos, wooden boardwalks that take visitors to see the diverse landscape of dunes and marismas. There are also four cycle routes, stretching for 53 kilometres / 33 miles. However, a large area is accessible only with specialized guides so as to reduce the negative impact of tourism.

Ideally, you should combine a guided tour to visit areas of the park otherwise inaccessible with an independent, self-guided tour. 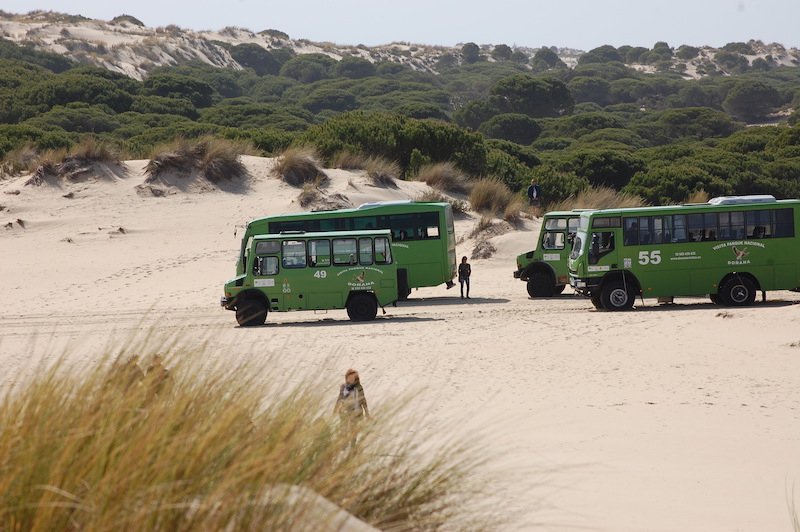 Several local companies organize 4×4 tours and horse rides, taking groups of people inside the park. A typical tour will last about four hours, crossing sandy beach, mobile dunes, woodlands, and marismas. Some companies also offer boat tours on the Guadalquivir River. Cooperativa Andaluza Marismas del Rocío is one of the leading companies that offers guided tours for exploring the park. The price starts at €30 per person.

Visitor centres are open all year round (except during festivities), and access is free, with no reservation required. These centres provide information about the senderos, or trails, being the departure point for many of the guided tours. Each visitor centre has at least one sendero (about 3-5km / 2-3mi long each).

El Acebuche is Doñana’s main visitor centre, located between El Rocío and Matalascañas (at kilometre 37.5 of the A-483 road). It has an informational exhibition, audiovisual room, cafeteria, gift shop, and a large picnic area.

There are other footpaths that do not start in the visitor centres. On the far south end of Matalascañas, just past the large Gran Hotel del Coto, there is a public park and the start of “Dunar”, a circular 1.5km boardwalk trail on a consolidated dune, as opposed to the shifting sand. Another one is the 1.3km long “Cuesta Maneli” footpath that starts at kilometre 39.7 of the A-494 road. 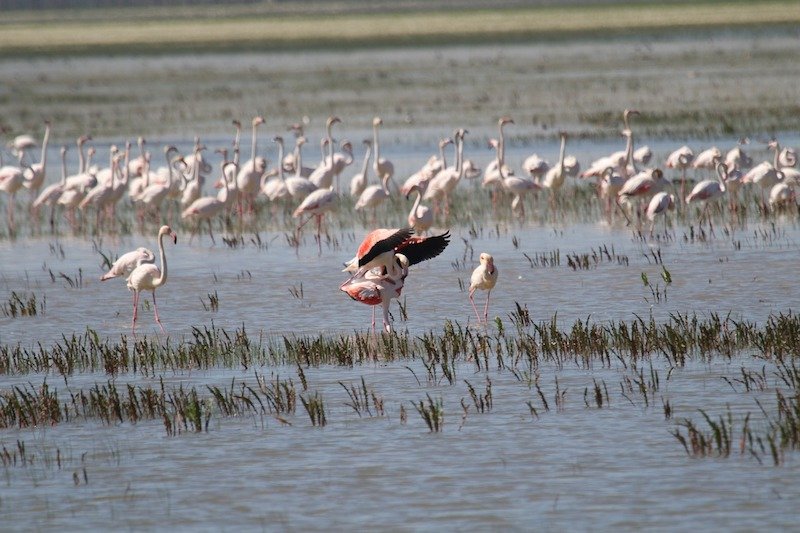 Flamingoes in the famous marismas of Doñana

Andalusia great weather makes Doñana National Park a year-round destination. For lovers of nature, the autumn and winter months are the most interesting, when migratory birds arrive from colder parts of Europe.

During the spring months, there is a burst of life and colour, and on Easter Sunday thousands of people join the famous El Rocío pilgrimage.

July and August can be very hot, and are the peak travel months. Advance reservations are highly recommended.

A leisurely drive across the beautiful Andalusia landscape is the best way to get to and explore Doñana National Park. If you come from Malaga Airport or Jerez, you will have to go through Seville and then take the A-49 motorway west. If you come from Faro, Portugal, take the A-49 motorway east, and exit to the A-483 road that goes into Matalascañas.

The tourist accommodation in this region is concentrated in El Rocío, Mazagón and Matalascañas, and includes rural tourism, hotels and apartments, and even campsites near the beach. If you’re looking for beachfront hotels, here are some suggestions: