Home » Weather in Maceió – When to Go, Best Time to Visit

Maceió is the state capital of Alagoas in Brazil’s Northeast region.

This paradise destination is renowned for its beautiful beaches, natural pools, and reefs a few meters off the coast.

With a tropical climate, Maceió experiences a generally hot weather year-round, with little variation in temperature. Rainfall is actually the key variable in the climate of Maceió.

Seasons in Maceió are at opposite times to those in the northern hemisphere. Summer runs between December and March, during which temperatures can occasionally exceed 40ºC (104ºF). Heat waves are rare, though, since there is usually a breeze blowing from the ocean that moderates temperatures and the feeling of intense heat.

Rain is constant throughout the year, with the wettest period from April through August (22 to 24 rainy days per month). The driest months are November and December, experiencing on average 6 rainy days.

The relative humidity is over 80 percent most of the year, being at its highest ​​(above 85 percent) from May through July. 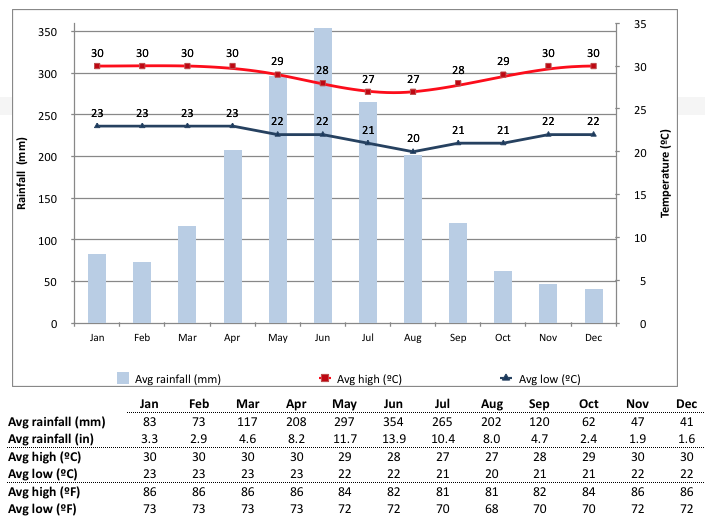 Maceió can be visited at any time of year. As a beach destination, warm temperatures can be expected year-round. If you want to avoid rain, don’t go between April and August, the wettest months in Maceió.

The high season is between December and February. Prices for holiday packages and hotels are at their highest, and it’s best to make reservations a few months in advance.