Home » Weather in Malta – When to Go, Best Time to Visit

Malta has a Mediterranean climate, which means the country typically experiences hot and dry summers, and mild winters.

The annual average temperature in the Maltese Islands is 18ºC / 64ºF, varying between 12ºC / 54ºF in January and 30ºC / 86ºF in July and August. Annual rainfall is relatively low. The beach season can easily extend to mid- or late October.

Summers in Malta are long, hot and dry. Between June and September, daytime highs are around 30ºC / 86ºF. Temperatures may be cooled down by sea breezes that bring cooler air.

Occasionally, however, thermometers can reach 40ºC / 104ºF, especially when the archipelago is affected by the Sirocco, a hot and dry wind blowing from North Africa.

Winters are mild, with averages around 14ºC / 15ºC (57 to 59ºF). That’s why winters are a popular time among British tourists, who travel to Malta in search of good weather.

Autumns have moderate temperatures ​​around 20ºC / 68ºF. Spring is perhaps the most pleasant season, with comfortable temperatures, ranging between 16 and 20ºC (61 and 68ºF).

Annual rainfall is relatively low, and occurs mainly in the autumn and winter months. October through December are usually the wettest months. A part of the rainfall in this period may take the form of heavy rain and thunderstorms. 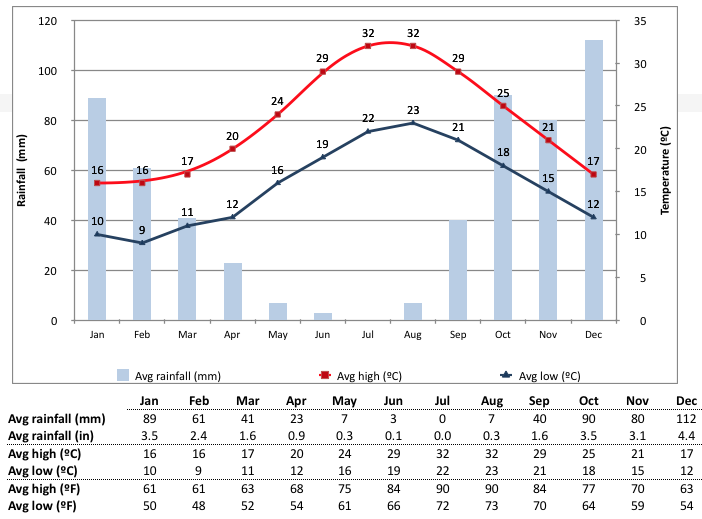 Malta can be visited at any time of year. One of the best periods for sightseeing is between April and June with mild temperatures and little rainfall.

Unless you plan to lie on Malta’s famous beaches, July and August can be very hot, both day and night, especially when the wind blows from the African coast.