Home » Weather in Norway – When to Go, Best Time to Visit

The climate of Norway is subarctic in most of the territory, and maritime temperate in the southern regions and coastal areas of the western fjords.

Despite being at the same latitude as Alaska and Greenland, the weather in Norway is warmer than one might expect, thanks to the Gulf Stream and warm air currents. Still, winters can be bitterly cold and dark.

In summer, from mid June through late August, temperatures are mild, around 20 – 25ºC (68 – 77ºF) in the southern region and the western fjords. Between Mandal and Oslo, it’s a good time to do outdoor activities. In the northern part of Norway, however, the weather can be more unstable.

In autumn, the landscape changes colour, going from green to brown with the fall of the leaves. The temperatures begin to drop as early as September, with average highs at 11ºC (52ºF) in Oslo and 7ºC (45ºF) in the northern city of Tromsø.

In winter, temperatures drop to freezing, and the country is covered with snow. Some northern parts become inaccessible, with roads cut off. The snowfall becomes more intense in January and February.

The average temperatures begin to rise in mid-March, and in May / June white gives way to green. Spring witnesses the greatest temperature differences between the northern and southern parts of Norway, with higher temperatures in the south.

Rainfall is distributed throughout the year, but varies according to the region. Coastal regions that are more exposed to the Atlantic Ocean, such as Bergen, receive more rainfall in winter, whereas the east coast receives most rainfall in summer.

In short, there is no shortage of rain in Norway (sometimes in the form of snow) both in winter and summer. 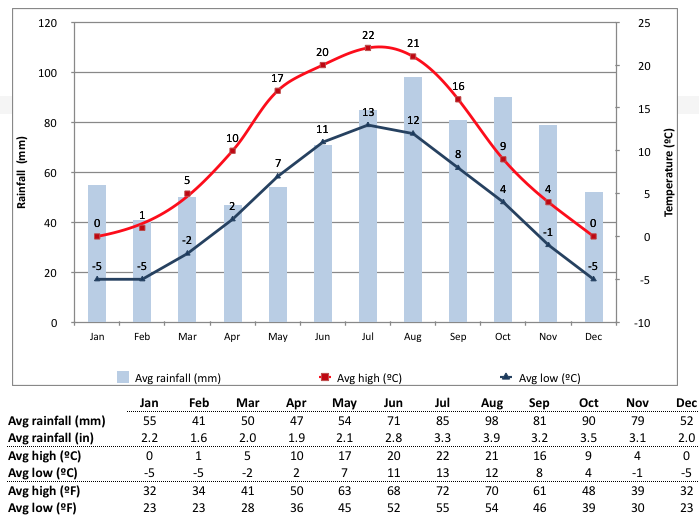 The best time to visit Norway is in the summer months, from June through September, when it’s usually mild and inviting for outdoor enthusiasts.

In midsummer, daylight takes over in places north of the Arctic Circle – there is no night darkness. This called the midnight sun. The phenomenon can be experienced in the North Cape from 14 May to 29 July, in Tromsø from 20 May to 22 July, and in Bodø from 4 June to 8 July (these are approximate dates).

On the other hand, the northern lights can be witnessed in winter, from late September through late March. Some of the best places in Norway to see the aurora borealis are Alta, Tromsø and the Lofoten islands.