Home » Weather in Porto – When to Go, Best Time to Visit

Porto enjoys a temperate climate, with mild temperatures throughout the year.

The weather of Portugal’s second city is mainly affected by its proximity to the sea and the warmth of the Gulf Stream.

Winters may be rainy, more so than in Lisbon, but summers are pleasant, with many sunny days and sea winds that moderate temperatures.

Winters are never too cold, with temperatures varying between 5ºC and 14ºC (41 and 57ºF). Freezing days are rare in Porto.

Spring and autumn bring unpredictable weather. Between late March and May, rainfall and wind are common, but periods of sunshine and mild temperatures (around 20ºC / 68ºF) are also frequent. Similarly, between late September and November the weather can be rainy, mixed with many days of nice weather and pleasant temperatures.

It rains mainly during the autumn and winter months, but in early spring rainfall is not uncommon too. The first strong rain usually happens in October. The wettest month is December, with an average of 181mm / 7.1in, and some erratic and sudden downpours. 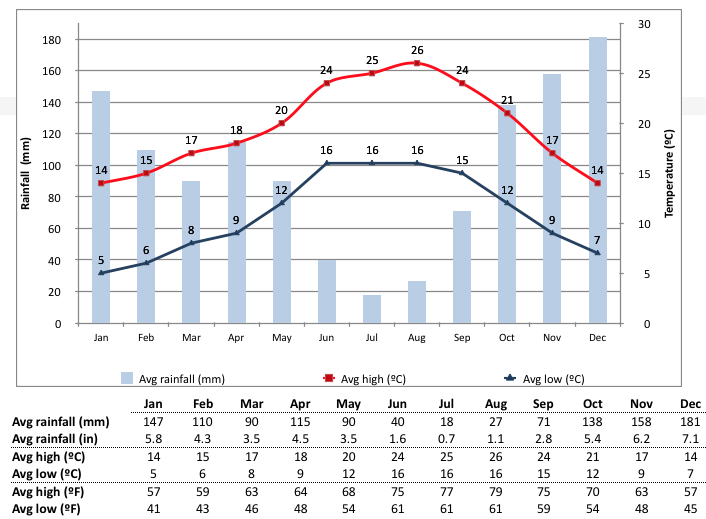 The sea temperature in Porto’s region reaches its highest value (around 18ºC / 64ºF) in August.

Porto is a destination to visit throughout the year, as the temperatures are generally mild. But winter can be rainy, and the weather in spring and autumn can unpredictable.

Early or late summer (June and September) turns out to be the ideal time to explore Porto. To make the most of your stay, you may want to avoid the peak of the high season (mainly July and August), when hotel prices are at their highest. This is also the time when you’ll most likely have to stand in queues to visit popular attractions such as Clérigos Tower, Serralves Museum or Lello Bookstore.