With nonstop flights to Ponta Delgada from several international destinations, São Miguel Island is now more accessible than ever.

Renting a car is the best way to get around the “green island”. But if a visitor does not want or simply cannot use a car, there are alternatives available, such as organised tours. Also, Ponta Delgada’s Taxi Association offers a range of tourist circuits at fixed prices.

If two full days is all you can spare on São Miguel, this is an itinerary designed for you. It covers major attractions on the island. As always, if you want to see a lot, get up early, São Miguel awaits you.

The Azores is a year-round destination as temperatures remain mild even in winter. Actually, the islands have one of the warmest winters in Europe, and summers are never too hot.

Ponta Delgada is the logical place to base yourself. There is plenty of accommodation ranging from five- and four-star hotels to hostels to guest houses. Take a look at our list of the Best Hotels in Ponta Delgada. 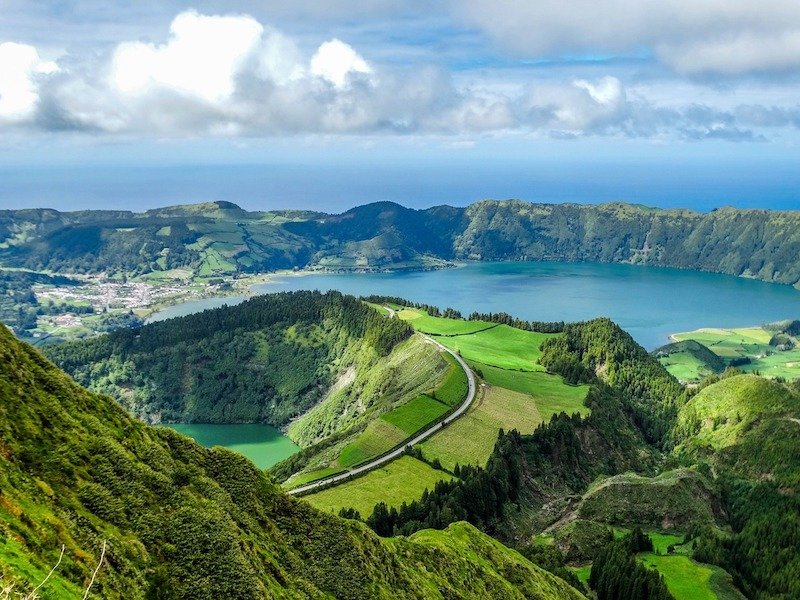 Start off in Ponta Delgada’s city centre which is small and compact. A couple of hours is enough time to explore the Azores’ largest city.

Admire the City Gates (Portas da Cidade), dating from 1783. The three arches symbolise the city’s defense system. Visit some of the many churches – Santo Cristo Church, São Sebastião Church and São José Church are three of the best known. Walk along the marina towards the Fort of São Brás. Head to Graça Market and sample some of the local specialties: bolo lêvedo, a kind of sweet muffin, cheese, tea, and pineapple.

Given there aren’t many restaurants in the area, here are two suggestions:

After lunch, drive around the whole northwestern coast, see the views and visit local towns. The first stop is Mosteiros known for its black sand beaches and natural swimming pools. Continue along the coastal road on EN1-1A, making stops in Santo António, Capelas, Calhetas on your way to Ribeira Grande. Enjoy the views, before going back to Ponta Delgada. 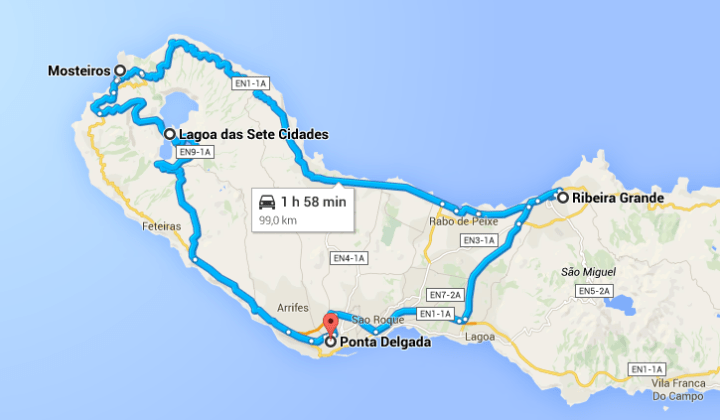 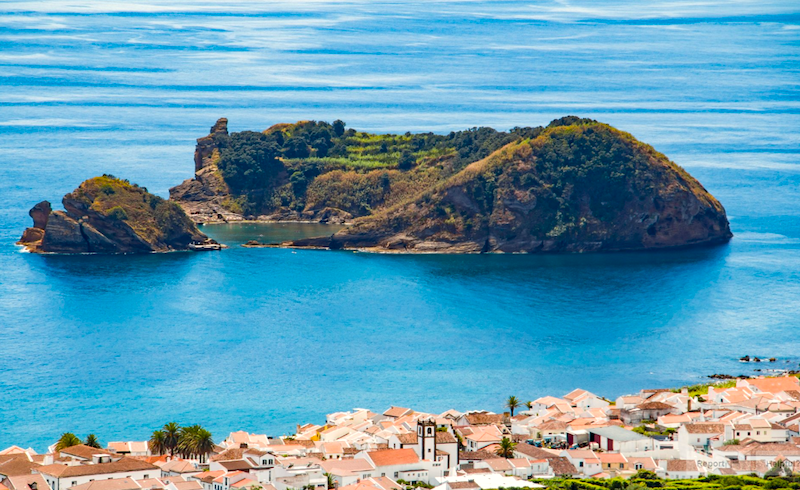 On the second day, visit the eastern part of São Miguel Island.

Drive east on EN1-1A and visit Lagoa do Fogo. Then, spend some time in Vila Franca do Campo. You can simply enjoy the views or take the ferry from the marina (a 10-minute trip on summer months only) to the islet one kilometre off the coast. Seeing it from the town, you’ll never guess that its interior is the crater of an old volcano. Being a natural reserve, there’s lots of fish to see if you are able to get snorkeling gear.

Once you’re done, drive another 30 minutes towards Lagoa das Furnas. Visit the beautiful Terra Nostra Park and Furnas, famous for its hot springs. Discover the Azorean geothermal cuisine with the famous cozido das Furnas, a kind of stew with layers of meat, vegetables, chouriço and blood sausage, that simmers for about five hours in the Furnas caldera. Order this volcano-cooked dish at a local restaurant. Restaurante Tonys comes recommended. You should make a reservation: www.restaurantetonys.pt | phone: +351 296 584 632 | email: tonys@sapo.pt.

After a hearty meal, continue east along the road and visit the Nordeste area. Enjoy the ocean’s breathtaking views from Ponta do Sossego, Ponta da Madrugada and Farol do Arnel (a lighthouse), as well as the several waterfalls and cliffs.

Then, go west on the same road (EN1-1A) and visit Achada and Porto Formoso. The area is worth for its viewpoints and several hiking trails offering panoramic views of the coastline. After spending some time here, head to Ribeira Grande and back to Ponta Delgada.

If you can spare another half day, make a boat trip to watch whales and dolphins. While cetaceans can be seen throughout the year, being resident species, spotted dolphins, sperm whales and sei whales are more frequent in summer. Visit the Azores’ tourism website to learn more about tour operators. You can also find them leaving from the harbour or marina.