Home » Weather in Sweden – When to Go, Best Time to Visit

Sweden is often considered a cold country. But, despite its latitude at 60ºN, this Scandinavian country has a moderate climate thanks to the warmth of the Gulf Stream that affects Swedish temperatures, especially in the winter months.

In Sweden, the four seasons are well defined: summer runs from June to August, winter is the longest season between November / December and March / April, and spring and autumn take place in the months in between.

Roughly, we can divide Sweden into three main regions, which experience somewhat slightly different climates: Götaland in the south, Svealand in the centre, and Norrland in the north.

In Götaland (Gothenburg and Malmö), winters are shorter and less cold than those in the remaining Swedish regions. In summer, day temperatures range between 15 and 25ºC (about 59 – 77ºF), but high humidity may affect the perceived temperature. Snow is rare in southern coastal Sweden, even during the winter months.

Stockholm is part of Svealand, in Central Sweden, which extends to the west to southern Norway. Svealand has a humid continental climate, which means cooler temperatures. Snowfall is common in Stockholm between mid-November and late March.

Norrland in northern Sweden is probably the reason why Sweden is considered a cold country. This sparsely inhabited region has a subarctic climate, with long winters and temperatures below zero for several months. In summer, highs are usually around 15ºC (59ºF), occasionally reaching 30ºC (86ºF).

Compared to Norway, Sweden is less rainy being more continental. Rainfall is distributed throughout the year, but summer (July and August) is the wettest period. 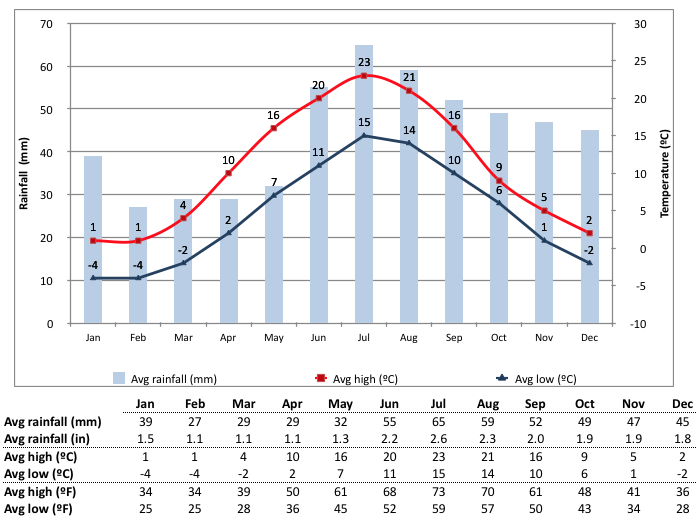 The best time to visit Sweden is in late spring and summer (May to September) when temperatures are milder and days seem never ending. It’s always wise to pack a waterproof jacket or one of those small fold-up umbrellas, even during summer.

However, winter (until March) is the best time if you’re visiting to witness the Northern Lights in the Swedish Lapland.