The German spa town of Baden-Baden is located on the western foothills of the Black Forest on the banks of the Oos River.

Within easy reach of the French border, Baden-Baden is an interesting destination for thermal baths and so much more. From Strasbourg (France), Basel (Switzerland) and Frankfurt (Germany), Baden-Baden makes for the ideal and relaxing day trip. 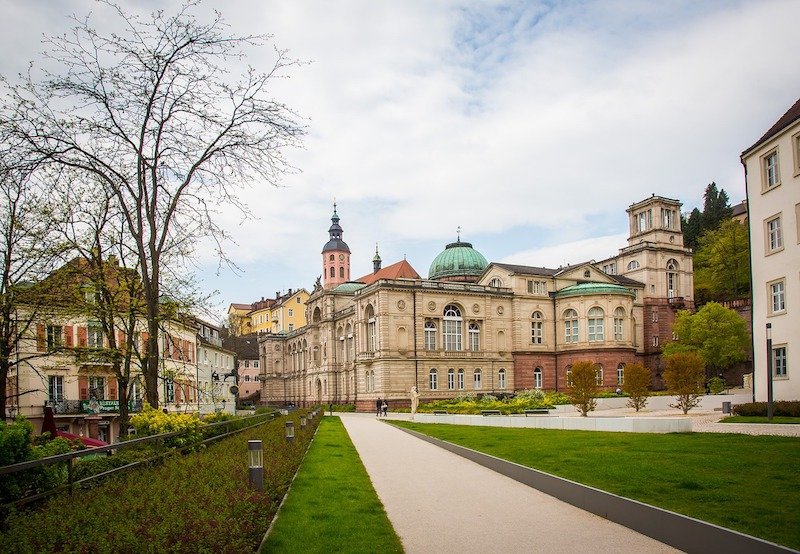 Known for its restorative powers, Baden-Baden’s thermal waters bubble at temperatures of 68ºC (154ºF) from twelve springs at 2,000 metres (6,562 feet) beneath the ground. These spas and their positive effects on the skin and respiratory tract are the primary reason why visitors go to Baden-Baden.

The Caracalla Spa is one of most popular. It’s extremely complete, including several wellness programs, sauna, indoor and outdoor pools, and water jets.

The Friedrichsbad are the historic spas, combining the tradition of Roman and Irish baths since 1877. Unlike Caracalla, these impressive baths impose a strict no-clothes-allowed immersion. But the place promises an invigorating 17-step ritual with changing temperatures and various baths for total relaxation. Equally inspiring are the ornate celings of the central dome. 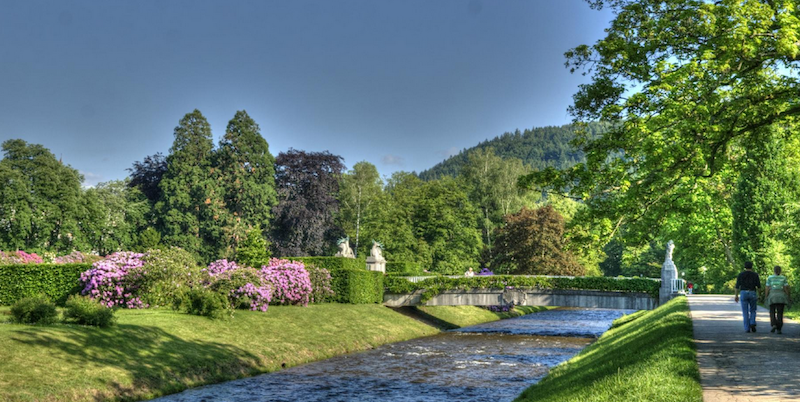 Lichtentaler Allee: This 3.5 km long tree-lined boulevard decorated with Belle Époque monuments is a tribute to the art of gardening.

Museum Frieder Burda: Nestled in the Lichtentaler Allee Park, this museum was designed by the architect Richard Meier. It has a wide collection of contemporary art, with works by Georg Baselitz, Ernst Ludwig Kirchner and Jackson Pollock.

Festspielhaus: Built in the 19th century, this imposing concert hall is located just outside Lichtentaler Allee. It is one of the largest opera and concert venues in Europe.

Casino Baden-Baden: This casino has been the ultimate symbol of luxury since the early 19th century

Badeviertel: The spa district is also home to some of Baden-Baden’s finest shops.

Altes Schloss: The Hohenbaden Old Castle, also known as Altes Schloss, was built in 1102. Visit its dungeons and climb to the viewpoint for stunning views of Baden-Baden, the Black Forest and the Rhine Valley.

In the historic center, you’ll find a number of shops, and several restaurants where you can sample Alsatian cuisine, which has both French and German influences
The restaurant attached to Brenners Park-Hotel & Spa (Schillerstrasse 4-6) serves regional specialties, and the Löwenbräu (Gernsbacher Strasse 9) offers Bavarian cuisine.

A less expensive option is Rosso Bianco (Lichtentaler Allee 5) located in the precinct of the oldest German tennis club, the TennisClub Rot-Weiss. The menu includes salads, pizzas and pasta, served on the terrace overlooking the tennis courts.

Hotel Belle Epoque: Set in a beautiful stately home with its own private grounds, this hotel is located walking distance of Baden-Baden’s main attractions. All rooms have a classic decor and offer all the amenities.

Hotel am Markt: This family-run hotel has been a guest house for over 250 years. Located in the heart of Baden-Baden, it offers modern and individually decorated rooms. In summer, breakfast is served on a pleasant terrace.

Heliopark Bad Hotel Zum Hirsch: This boutique hotel not only has a spa as many of the rooms have bathrooms with their own thermal spring water supply.

How to Get There

The budget Easyjet has flights to Basel-Mulhouse-Freiburg Airport. Another option to get to Baden-Baden is to fly on Ryanair or Lufthansa to Frankfurt International Airport.

From Basel (Basel SBB) and Frankfurt (Main) Hauptbahnhof railway stations, there are direct trains to Baden-Baden station, about 15 minutes by bus (line 201) from the city centre. Either way, the journey by train takes about 1h30. Tickets start at €20, and can be purchased online or on site.