Cape Verde is an archipelago consisting of ten volcanic islands (nine inhabited) in mid-Atlantic, located about 600km / 373mi west of Senegal, off the African coast.

Here are the best attractions in Cape Verde – all offer truly authentic experiences. To learn more about each island and your best options for inter-island travel, see Travel Guide: Uncovering the Cape Verde Islands. 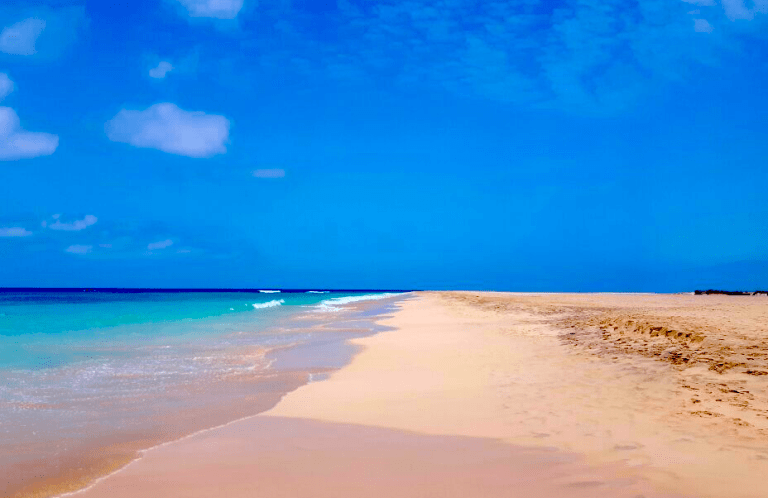 Enjoy surfing and diving in the clear waters, as well as walking along the soft sand. Watch the fishermen bring in the catch of the day, and the women preparing and selling the fish. To stay directly on Santa Maria Beach, check out Hotel Morabeza or Hilton Cabo Verde Sal Resort. 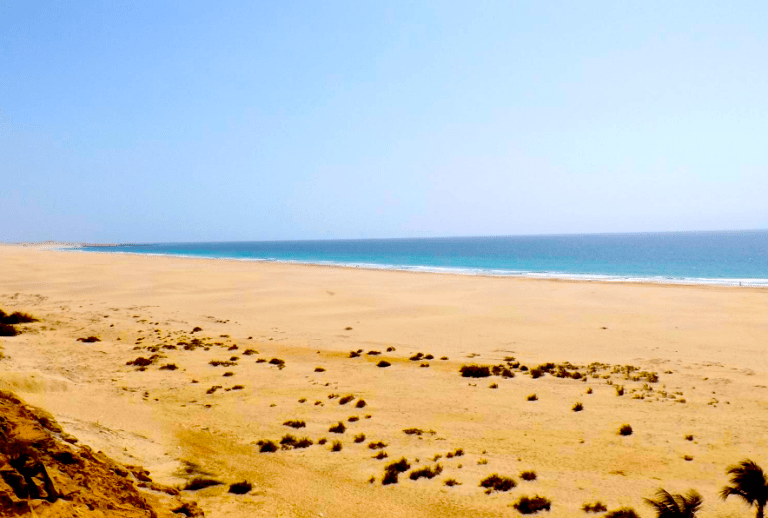 Boa Vista Island offers 55km / 34mi of white-sand beaches and small coves, where you can see turtles and whales. Chaves is one of the island’s most beautiful beaches. With a breeze blowing during the day, it’s an inviting place for long and romantic walks by the sea, enjoying the magnificent views and sand dunes. While it’s is perfect for windsurfing, Chaves Beach may sometimes be a bit too windy for bathing though.

Besides the Iberostar, there are not many hotels around this area, which means Chaves Beach is a great place to stay if you come in search of tranquility. 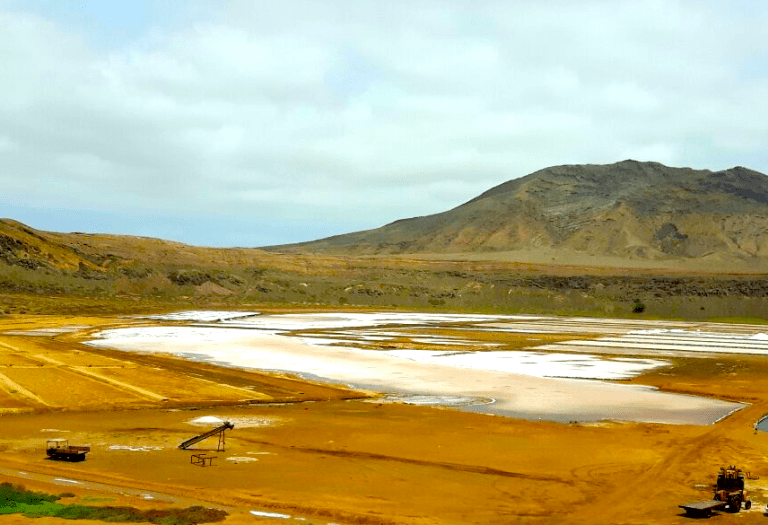 Pedra do Lume is an old salt mine located inside a volcano crater, and one of Sal’s main tourist attractions. While visiting, enjoy the views and bathe in the natural lake. Because of the salt, a fun thing to do is to fall over and float, or to dog paddle, the only way you can swim. Admission costs €5. For €1, you can take a fresh water bath after the experience. Massage treatments with salt are also available. 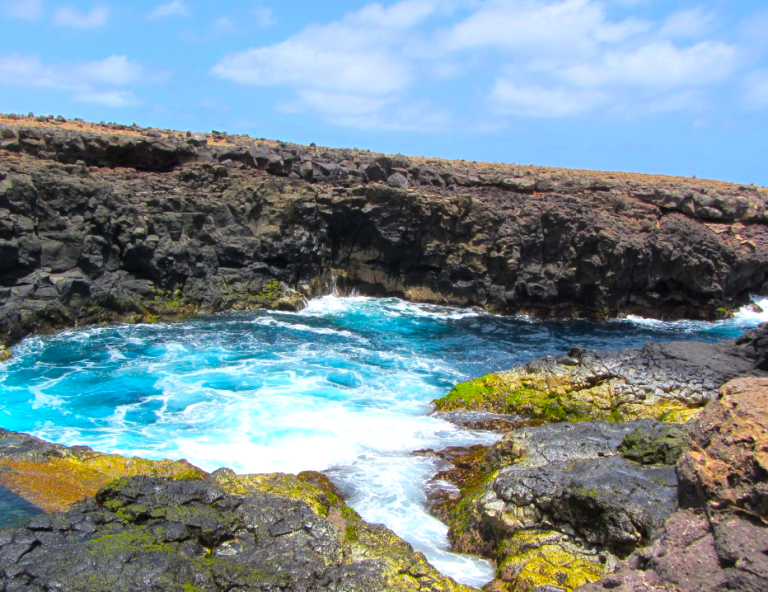 Blue Eye is another great attraction on Sal Island. It’s a natural pool with turquoise waters and an underwater cave several metres deep, resulting from the waves crashing against the volcanic rock. Even though there are walking paths to reach Buracona, be sure to bring comfortable shoes. There’s a café on site, as well as a shop to pick up a souvenir. 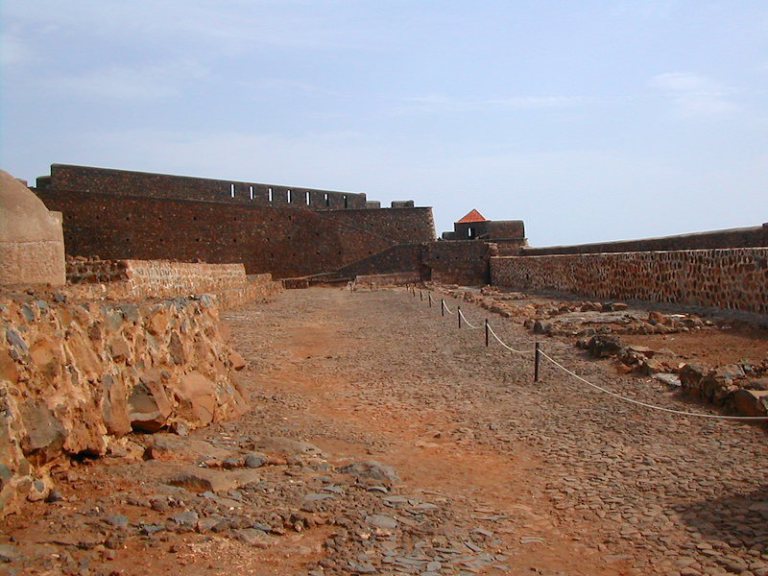 Santiago is Cape Verde’s largest island, the first one to be discovered by the Portuguese explorers in 1460. Cidade Velha is the archipelago’s ancient capital, founded in 1462. From its glorious past remains a valuable architectural heritage.

A UNESCO World Heritage Site since 2009, it includes Rua da Banana, the first cobbled street built in Africa, two churches, the Fort of São Filipe, and Pelourinho, a small yet significant pillory from the 16th century, symbol of royal power, and the place where escaping slaves were punished.

There are plenty of restaurants in the area selling freshly caught fish and seafood – Tereru di Kultura is one of the most popular. 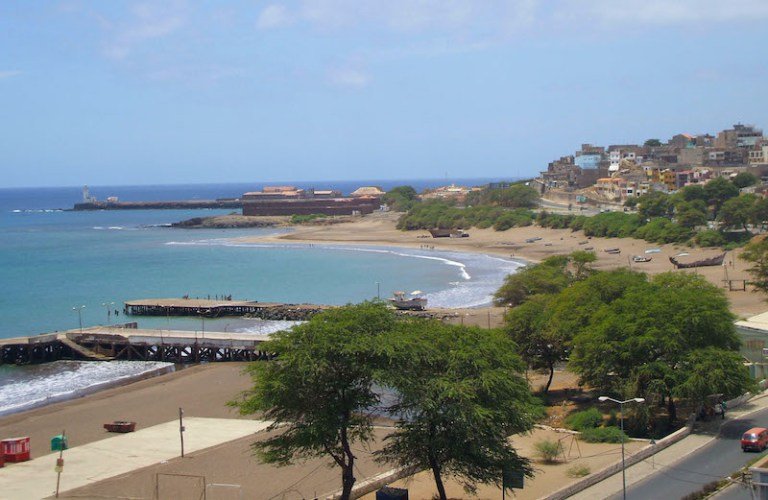 Gamboa Beach seen from the Plateau

Only 14km / 9mi separate Cidade Velha from Praia, the capital and largest city of Cape Verde. Lying on the southern coast of Santiago Island, Praia is an interesting destination because of the historic buildings in the central district known as Plateau, the lively market, and the welcoming locals. Quintal da Música is one of the best restaurants in Praia. 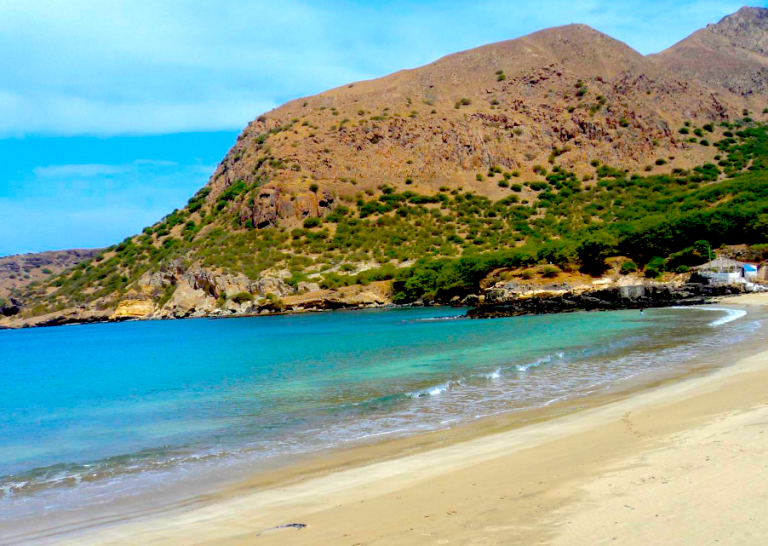 Close to the northernmost tip of Santiago, about an hour and a half from Praia, Tarrafal is both the site of a former Penal Colony and one of the most beautiful beaches in Santiago. The prison was established in 1936 by the Estado Novo (the authoritarian regime installed in Portugal between 1933 and 1974) to receive political prisoners. It later became a forced labour camp for those opposing the regime. The visit to the Resistance Museum of Tarrafal lasts about one hour.

Outside the prison walls, Tarrafal Beach is the perfect place to relax with soft white sands and crystalline waters at 25ºC (77ºF). It’s also a great location for surfing. While here, enjoy the fresh fish and cachupa, a kind of slow-cooked stew of corn, beans, cassava, sweet potato, fish or meat, served in local restaurants.

São Vicente is the perfect island for those seeking to combine beach, fun and culture. Mindelo is the island’s capital as well as Cape Verde’s most cosmopolitan city, mainly for its musical tradition. It was here in the lively Mindelo bars that the great Cape Verdean Cesária Évora began her career as popular singer.

São Vicente is also home to two annual events which are the biggest festivals in Cape Verde: the Carnival and the famous Baía das Gatas Music Festival that takes place on the first full-moon weekend of August. 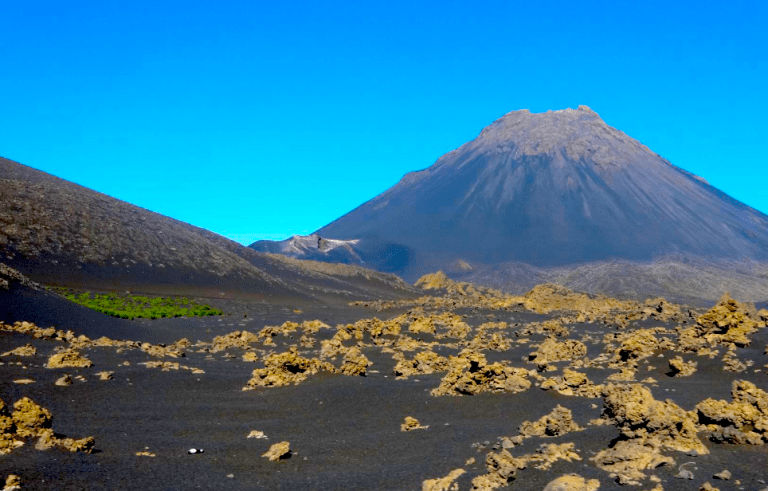 Located in the southwest of the archipelago, Pico Island is famous for its Pico do Fogo, standing at almost 3,000 metres / 9,000 feet of altitude, the highest peak of Cape Verde.

Travellers can climb to the crater’s top and enjoy the impressive volcanic landscape. The formations of consolidated lava are unlike any you have ever seen. The climb takes about 5 hours, and it’s a good idea to hire a guide. Travellers should take footwear for uneven terrain, and pack a sweater to wear at the highest altitudes. 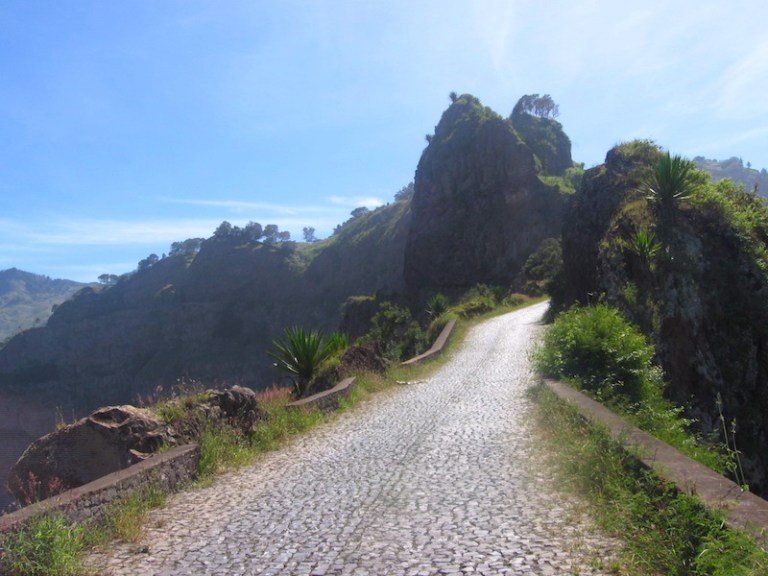 Santo Antão is the most western, and one of the most beautiful Cape Verdean islands. With mountains, valleys and forests, it is the ideal place for trekking, offering different kinds of trails and levels of difficulty.