Malta is an archipelago in the Mediterranean Sea, south of Sicily (Italy), northeast of Tunisia and west of the city of Alexandria in Egypt. With a strategic location, Malta was ruled throughout the centuries by Phoenicians, Romans, Arabs, Normans, Aragonese, French and British.

The cultural influences are present in the historic sites and buildings, the language – Maltese, which sounds Arabic, sprinkled with Italian, French and English words -, and the cuisine, with flavours from Sicily and the Middle East, and the use of local ingredients such as Malta’s unique honey.

One of the advantages of being one of Europe’s smallest countries is that you won’t waste time getting around. Distances are short and no other place in Europe offers such a concentration of historic sites, megalithic temples, beaches, tourist resorts, bars and restaurants. 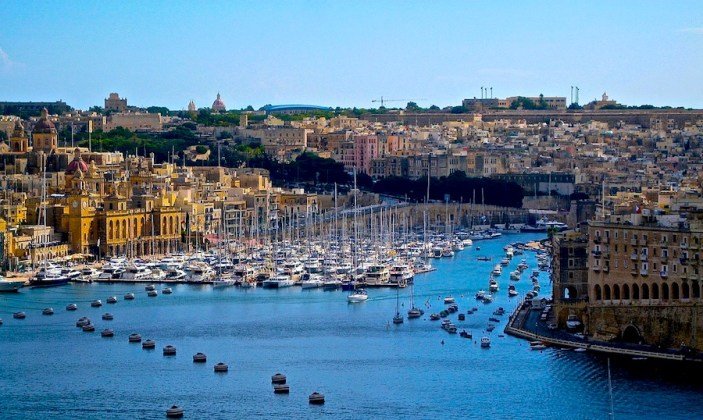 A panoramic view of Valletta

Malta’s capital city is a great starting point, its centre being a UNESCO World Heritage Site. The best way to explore Valletta is to get lost in its narrow and steep alleys. Republic Street is the main shopping road, with a pedestrianised stretch, running to the Fort of St. Elmo. The squares were originally designed to be meeting places for soldiers in case of attack. The most famous is the Republic Square, sometimes known as Piazza Regina (or Queen’s Square after a statue of Queen Victoria statue was installed here in the 19th century), with Baroque buildings and several open air cafés.

The Grand Harbour is also a must-see, as are St. John’s Cathedral and the auberges, originally built in the 16th century to house knights of the Order of Saint John. The most impressive one is the Auberge Castille, home to the office of the Maltese Prime Minister. 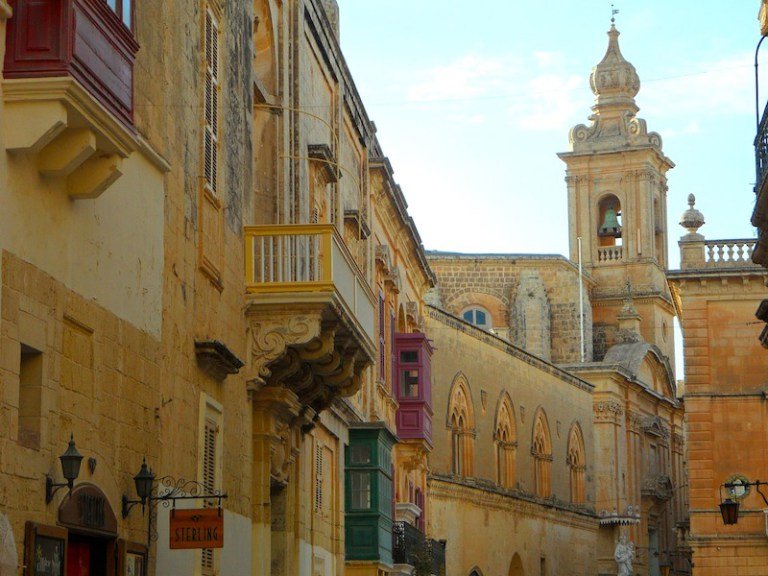 Mdina is a 20-minute drive from Valletta. The ancient walled city was Malta’s first capital during the Middle Ages. Known as the silent city, Mdina’s narrow streets are evidence of the Arab presence. The city was, and still is, home to noble Maltese families, descendants of Normans, Sicilians and Spaniards, who built their palaces here from the 12th century onward.

Take a walk along the city walls to enjoy Malta’s scenery while experiencing the medieval Mdina. As you emerge from Mdina’s narrow streets, admire St. Paul’s Cathedral, with a dome that dominates the skyline. Cars are prohibited inside the walled city, but there is parking available outside, either below the walls or in Rabat which is adjacent to Mdina.

Rabat is quieter than Mdina and more rural but has an important cultural heritage to explore, which includes archaeological and historic sites: the Roman village (Domus Romana), the catacombs, St. Paul’s Grotto, and several monasteries and churches of the Franciscan and Dominican orders. 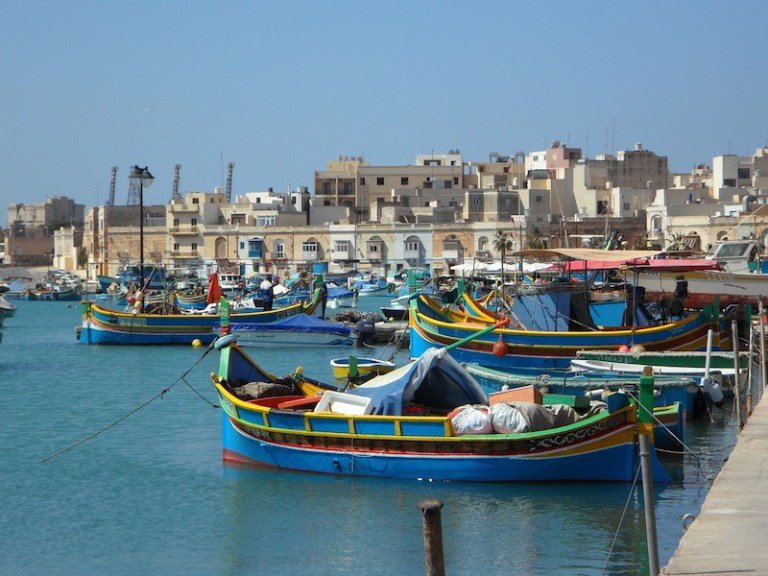 The southern fishing villages of Marsaxlokk and Birzebbugia, about an hour’s drive from Valletta, are also worth a visit. The former is famous for its fish market on Sundays, selling souvenirs, clothing and fish, and for its colourful traditional boats, known as luzzu in Maltese, that make a scenic effect anchored in the port. All the luzzu have the eye of Osiris painted on the front bow thought to protect fishermen at sea. 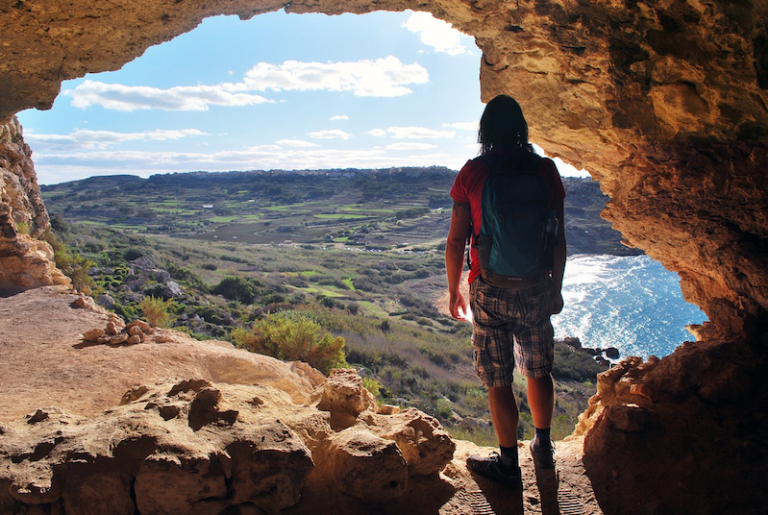 The Blue Grotto and the Mnajdra and Hagar Qim megalithic temple complex are a short drive away, so we recommend visiting them together. The Blue Grotto is a quaint location, where you can explore the natural sea caverns. Diving, snorkeling and cliff climbing are popular activities all year round. A short distance away, you can visit the megalithic temples inscribed on the UNESCO World Heritage list. 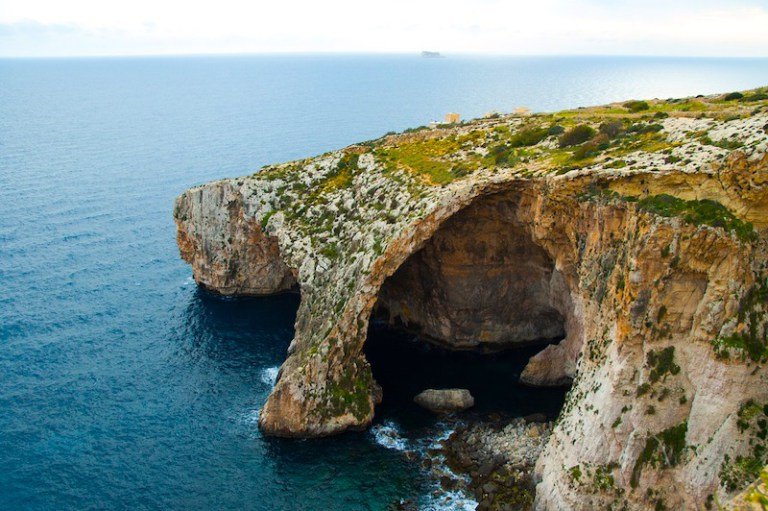 Gozo is a small island but has many things to do. Its capital Victoria is well worth a visit for its old Citadel if you love architecture and history. Other places to explore on Gozo include the Fontana fresh water springs, the Ggantija megalithic temples and the Takola Windmill, the quiet and relaxing village of Xlendi where you can swim, snorkel, dive and sunbathe, the Ta’Pinu Sanctuary, and Calypso’s Cave where, according to the legend, the beautiful nymph kept Ulysses captive for several years.

From Cirkewwa, in the north of Malta, you can take the 30-minute ferry to Mgarr on Gozo Island. The return ticket costs €4.65. Check out the updated schedules. To get around Gozo, use the efficient bus system (see Malta public transport map) or rent a car. 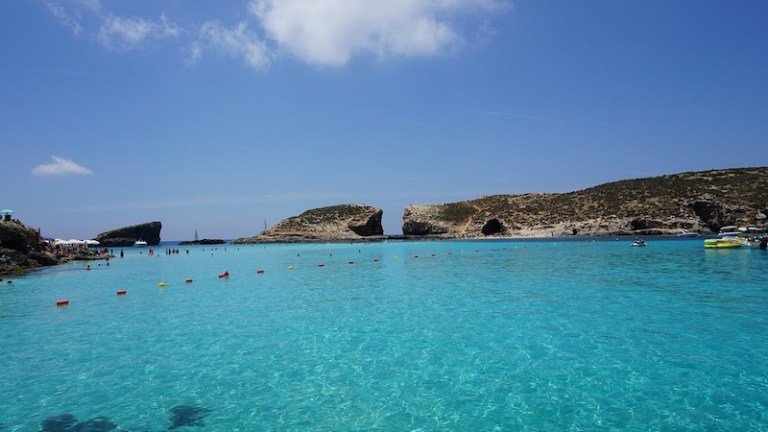 Comino is an island of 2.5km by 1.5km, a nature reserve and a bird sanctuary. There are no roads or cars, only tracks, and one hotel, a small chapel and St. Mary’s Tower built by the Knights of Malta in the 17th century. Even if you do not stay on the island, don’t miss a day trip to the Blue Lagoon and enjoy the turquoise blue sea.

Several ferries depart from Malta at Cirkewwa and from Mgarr harbour on Gozo. A number of operators provide the service, but Captain Morgan is probably the largest one.