Paraguay is perhaps not the most obvious tourist destination, but visiting it gives you the opportunity to experience the authentic South America.

The country features a unique blend of European and Guarani cultures, colonial architecture and history, and natural landscapes.

Read about the top five attractions and things to do in Paraguay, and find out why this little-known country can prove to be a surprising destination. 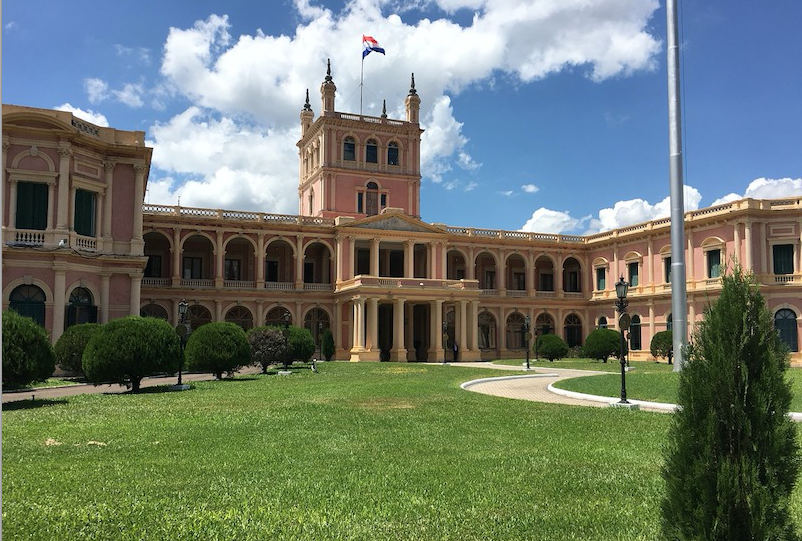 Unlike other South American capitals, such as Rio de Janeiro, Buenos Aires or Montevideo, Asunción is not built for tourism. Still, there are a few sights in the city centre that you can easily discover on foot around the barrio La Catedral, the neighbourhood named after Asunción’s cathedral.

This barrio is home to the Panteón Nacional de los Héroes, a small mausoleum where many of the national heroes rest, the Palacio de los López and current seat of government, the iconic Hotel Guaraní, a symbol of Asunción since it first opened in 1961, and Casa de la Independencia (free), one of the few colonial buildings in Asunción, dating from 1772, where Paraguay’s independence was secretly planned in 1811.

If you enjoy trains, pay a visit to the old central railway station (Estacion Central del Ferrocarril) turned museum. Admire the old steam locomotive to get a glimmer of what it once used to be.

For a taste of the authentic Paraguay, walk about 20 minutes until you come to the Mercado Municipal Cuatro (4). This sprawling market is crowded with stalls selling fruit, vegetables, meat, clothing and electronics made in China.

The best of Paraguayan art can be seen at Museo del Barro (free) set in an impressive new building. The museum has an interesting collection that includes a range of pre-Colombian ceramics, colonial Christian icons and statues, and contemporary paintings. 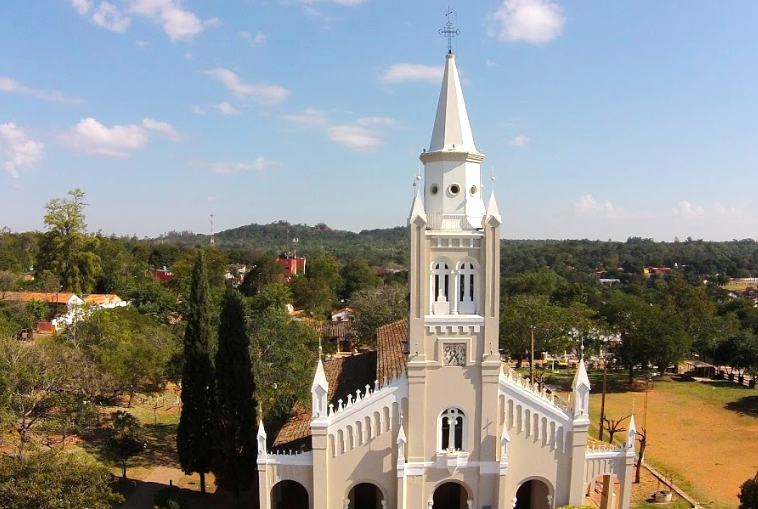 Located about 30 kilometres / 18 miles from Asunción, Areguá is a town on the shores of Lake Ypacaraí, known as the Paraguayan capital of pottery and strawberry. It’s on the Golden Circuit (Ciruito de Oro) of historic towns around Asunción.

The main thing you will do is to wander through the colourful “mercado de artesanías”, an entire street lined with craft shops selling bowls and pots, gnome-like figures, and other ceramic objects. You can also admire the colonial buildings on Avenida Mariscal Estigarribia leading up to the elegant Church of Areguá.

The traditional Strawberry Festival takes place in August, when you can sample several strawberry-based desserts and juices, including jam, ice cream and pie.

There’s also the nearby Cerro Koi, a hill and natural attraction, featuring a unique formation of octagonal sandstone. Only in two other countries (South Africa and Canada) have been found similar rock formations, though not exactly the same. Koi Hill also offers sweeping views of Areguá and the lake. 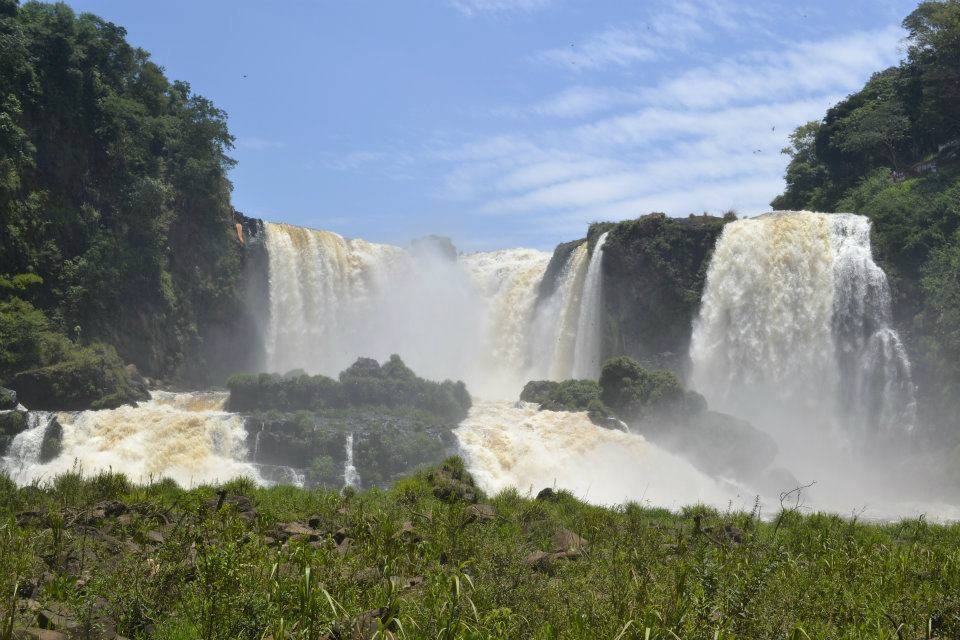 Located in the outskirts of Ciudad del Este, the Monday Falls are one of the natural wonders of Paraguay. These 40-metre-tall falls (about 130 feet) feed the Monday River – Monday, pronounced monda-i in Guarani, literally means “water that steals”. The falls are breathtaking, but perhaps suffer from their proximity to the neighbouring Iguazu, less than 40 kilometres / 25 miles away. The Monday Municipal Park preserves the natural forest around the falls, offering viewpoints, a system of trails and a restaurant. 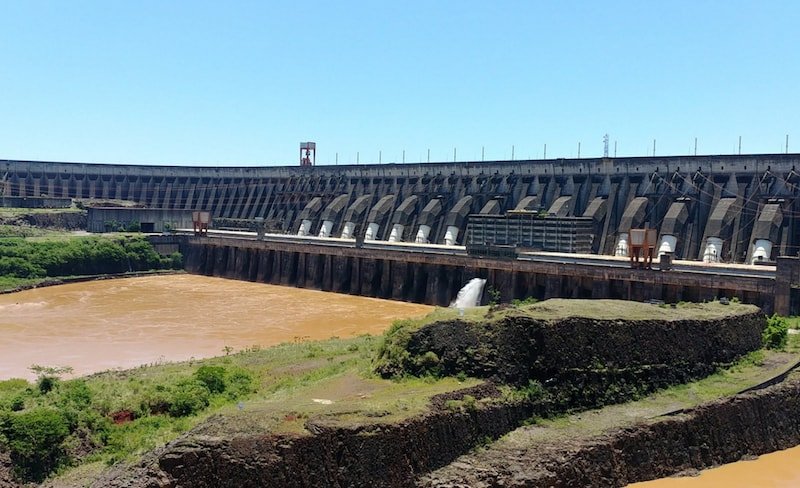 Thousands of Brazilian citizens cross the border daily into Paraguay to buy goods that are heavily taxed in Brazil. Here’s why Ciudad del Este is also known as the Supermarket of South America. Street bazaars and shopping malls sell electronics, clothing, toys, and every conceivable thing you might want. Besides bargain hunting, visitors can admire the Itaipu Dam, a huge hydroelectric power plant built jointly by Brazil and Paraguay. Ciudad del Este is also the gateway to the Iguazu Falls. 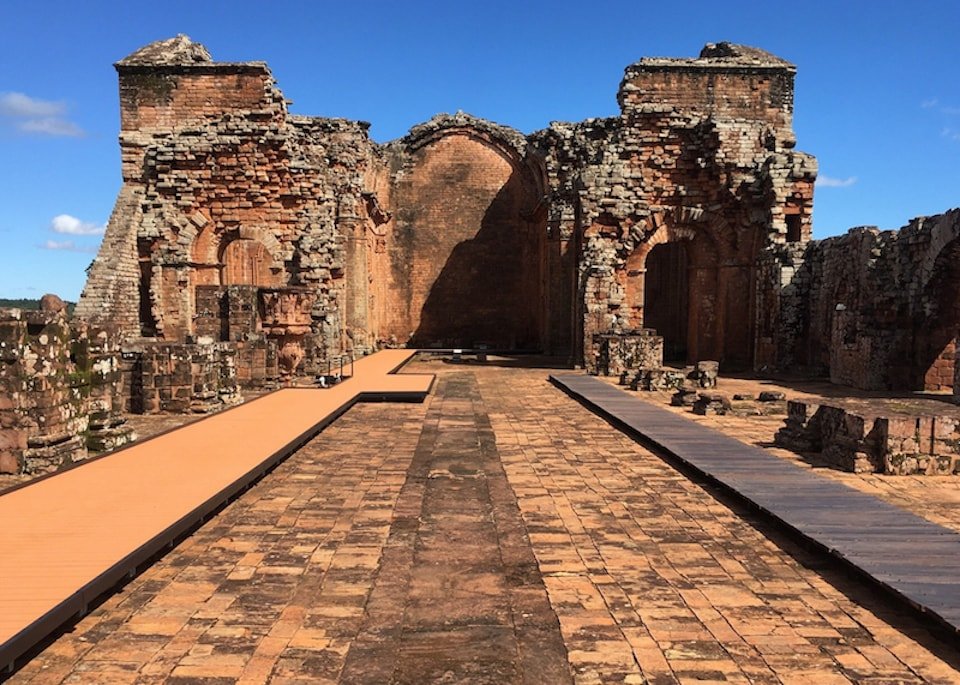 Not far from the town of Encarnación, the Jesuit missions of La Santísima Trinidad de Paraná and Jesús de Tavarangue were declared UNESCO World Heritage Sites in 1993. The missions are reminders of the Christianization of the indigenous populations of South America during the 17th and 18th centuries.

Originally built in 1706, the mission of La Santísima Trinidad de Paraná is the most complete. It has a Plaza Mayor with a main church and a school, as well as workshops. Founded at a different location in 1685, the nearby mission of Jesús de Tavarangue moved in 1760 to its current location, but remained unfinished as the Jesuit were expelled of the country in 1768. Otherwise, it would have been one of the largest churches at the time.