Home » Weather in Portugal: Seasons, Climate and Temperatures by Month

When it comes to the weather in Portugal, you have to consider two main regions in mainland Portugal, as well as the Azores and Madeira islands.

The weather conditions in Portugal are greatly influenced by the Azores High, a high pressure system that brings nice weather both in winter and summer.

North of the River Tejo, in mainland Portugal, along the temperate humid Atlantic coast, winters are usually rainy and summers are mild and dry, becoming hotter the further east you travel.

The region south of the River Tejo experiences a Mediterranean climate, with drier winters and hot and dry summers.

The Azores and Madeira islands have subtropical climates with year-round mild temperatures.

In winter, between December and March, average temperatures are relatively mild along the western and southern Portuguese Atlantic coastline. In fact, values vary between 9ºC / 48ºF in Porto, 11ºC / 52ºF in Lisbon, and 12ºC / 54ºF in the Algarve (Faro).

Winter temperatures in the interior of Portugal are a bit lower, especially in mountainous regions where lows may drop just below freezing.

The heat is more intense in the interior of Portugal, especially in the Alentejo and Algarve regions. Heat waves take place occasionally during which average highs above 40°C / 104ºF last a few consecutive days.

During spring and autumn, temperatures in Portugal are generally pleasant, but days can be windy, especially on the coastline.

Summer in Portugal is generally dry. In autumn and winter, the rainiest regions are those north of the River Tejo. It can snow in the mountains, especially in Serra da Estrela (highest point in mainland Portugal at 1,986 metres) and in Serra do Gerês. 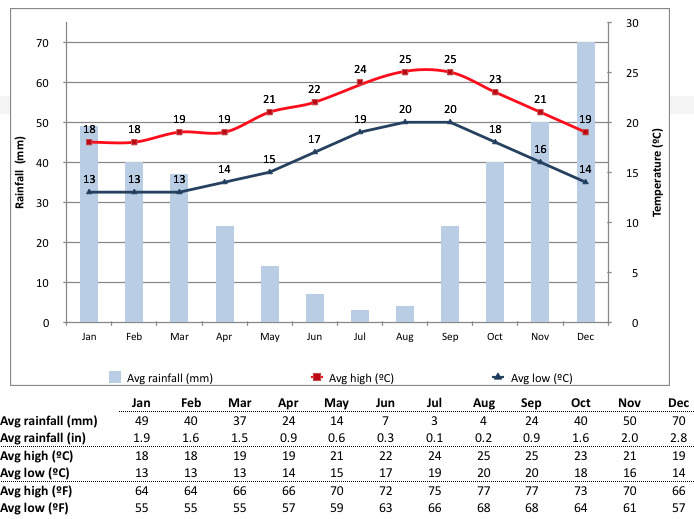 The best time to visit Portugal is whenever you can go, but milder temperatures in spring and autumn, and fewer crowds, usually make sightseeing a pleasure. In particular, May, June and September may have the the most desirable weather, with little rainfall.

July and August usually see high temperatures, and sometimes a stifling heat. The northern coast of Portugal is the exception, with milder temperatures in summer.