Home » Weather in Tenerife: Seasons, Climate and Temperatures by Month

Tenerife is the largest of the seven Canary Islands. The archipelago is part of Spain, but the islands have a diverse climate – claimed to be a spring-like weather year round.

This Spanish island has a subtropical climate, which means the temperatures are nice throughout the year, there is little rain and lots of sunshine. Here’s what to expect from the weather in Tenerife.

Temperatures and Rainfall in Tenerife

The dry and warm trade wind that blows in from the Sahara Desert is felt on Tenerife’s southern coast during the summer. Daytime temperatures can easily reach 29ºC / 84ºF in July and August. Nights tend to be warm, with lows around 22ºC / 72ºF. Tenerife receives practically no rain during this season.

Temperatures in autumn are still warm, ranging from 24-26ºC / 75-79ºF in October and November. Although the first rains can be expected, they are not very frequent.

In winter, Tenerife offers typical autumn temperatures, around 20-22ºC / 68-72ºF during the day, dropping to 15ºC / 59ºF on average at night. Rainfall increases, generally in the way of scattered showers.

Spring is a great time in Tenerife. From March to May, expect average highs of around 23ºC / 73ºF, lots of sunshine, and few crowds.

Note that the nice weather might not be present throughout the island. At higher elevations in the interior, such as Mount Teide, the climate can be quite different, with more rainfall and abrupt changes in temperature. In winter, higher mountains are often covered in snow. 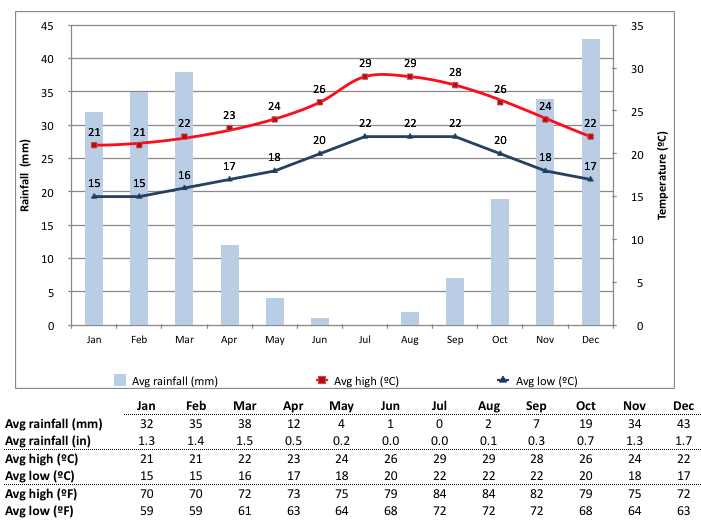 Since the weather is generally favorable, Tenerife can be visited all year round, including in December and January to escape the winter cold of northern hemisphere.

May and October are two of the best months in Tenerife, combining lower hotel rates, less crowds and great weather.

If you’re travelling during the high season, between June and September, it’s a good idea to book your flight and hotel in advance.